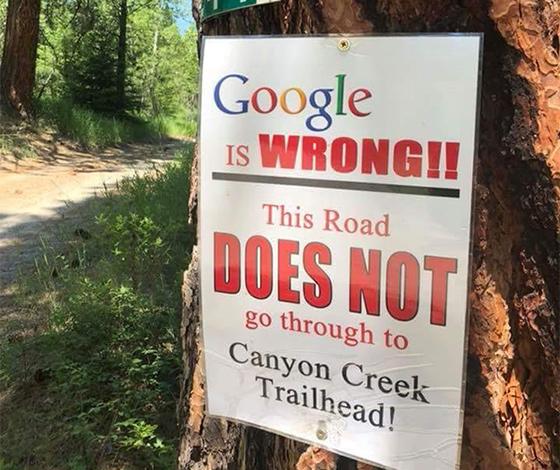 Google Maps began testing new shortcuts for directions to home and work. But it is less reliable providing an exact path in rural parts of the world.

That’s the message a colorful laminated sign tacked to a tree tries to warn those looking for the Canyon Creek trail head.

It’s not exactly clear from the photo where the trail head is located, but several searches in google.com surfaced the location as being in California. The post goes on to talk about Ireland and how difficult Google Maps is to use in the country — since the directions provided by the location service are off.

The image uploaded to a Reddit post earned more than 1,800 comments. One Reddit user working for a national monument just off the main highway posts: “The amount of complaints we get from people lost after driving 3 hours on an unpaved road in the middle of nowhere because their GPS told them to go that way is alarming.”

Using the navigation and search features of mapping systems, for the most part, works well in crowed cities, but across rural areas, such as Wyoming or Montana, is another story.

One of the more dangerous scenarios can occur during the winter months, when the snow is deep and there is no warning on cellular mapping and navigation services like Google Maps, Bing Maps or Apple Maps to warn of gated un-passable roads, road closures, down trees or other hazardous conditions.

Living in Wyoming most of year, I can attest to the dangers and requirements of depending on location-mapping search services.

“Every year, a few people die where I live doing this,” posts a Montana resident. “They end up going 15 miles up a road that leads to nowhere, get stuck in snow and die. You wonder how someone can get off the interstate and not realize something is wrong.”

The poster points to a missing person’s case, in which a man from Illinois visiting Montana in April got lost. His Dodge Charger was found abandoned off the interstate by Reed Point. And while he didn’t drive 15 miles up a mountain road, Paul Baston from Batavia, Illinois still disappeared into thin air off the interstate in the middle of nowhere.

There are countless stories of failed mapping directions. Many say they will never trust Google again without consulting a real map.

Google isn’t the only mapping service with bad reviews. Apple also gets its fair share of complaints. As one poster explains looking for a nearby gas station with Apple maps, he found Chevron’s corporate office instead.