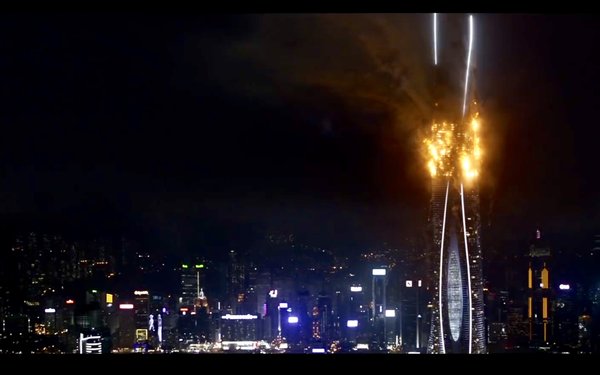 If you visit Los Angeles, you’ll still find hawkers selling tour maps to famous stars’ homes. In New York, tourists can visit the locations where “Seinfeld” characters met for lunch, or tried to get the “soup Nazi” to sell them a pint. Showbiz is good for tourism.

In an unusual take on that relationship, the Hong Kong Tourism Board means to get ahead of the movie promotion business by sponsoring the  “Skyscraper” Sweepstakes in connection with the opening this weekend of the latest Dwayne Johnson 3-D action thriller set in the sprawling city of over 7 million.

Winners get round-trip tickets to the city aboard Cathay Pacific Airways and three days at the luxurious Peninsula Hong Kong. It’s being heavily promoted on social media. The contest, sponsored in cooperation with Universal Pictures and Legendary Pictures, runs until July 31.

The idea that being a featured locale in a film can reap rewards for a long time is probably best exemplified these days by the tourism success of the trio of “Lord of the Rings” films that began in 2001. New Zealand was happy to be recast as Middle-Earth, and it’s a tourism lure that endures over nearly two decades. London also has a bunch of Harry Potter tours.

Hong Kong has been the site of plenty of notable films, including “Crouching Tiger, Hidden Dragon,” “Push: and “A Better Tomorrow” but they don’t necessarily lend themselves to tours. Neither does the “Skyscraper.” It features Johnson as former FBI Hostage Rescue Team leader Will Sawyer, now a security expert hired by the owners of the fictional  240-story Pearl building, billed as the tallest, safest skyscraper in the world.

What could go wrong? Well, it goes up in flames and now, he’s considered the culprit. He escapes detention and needs to clear his name and also rescue his family trapped in the, um, towering inferno. The comparisons to “Die Hard” probably wouldn’t be way off.

Producers are banking that this movie could hit big simultaneously in China and the U.S. Predictions for the opening weekend range to $30 million to $50 million. But Johnson is one of the world’s most popular box office attractions.  And in a movie season big on sequels and comic book superheroes, “Skyscraper” is touted as the biggest film with an original script.