Emmy Nominations Are A Reflection Of Where TV Is Now 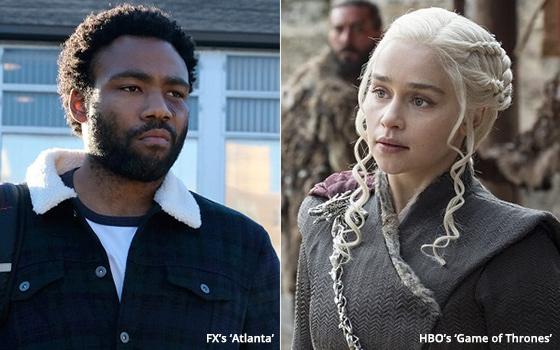 Judging by this year’s Emmy Award nominations, TV today presents an embarrassment of riches when it comes to quality content.

TV critics and regular people (i.e., “normals”) are free to disagree on the merits of this or that particular show. But in the main, TV production standards are so high -- at least at what you might call the “upper end” of TV content-creation and presentation -- that even shows that are difficult to categorize (or even enjoy, in some cases) at least look great.

The shows that garnered the most nominations announced last Thursday were predictable. They are the types of shows that get showered with critical acclaim and other awards (including past Emmys).

They include “Game of Thrones,” “Atlanta,” “The Crown,” “The Handmaid’s Tale,” “Stranger Things,” “This Is Us” (the token “network” drama), “Westworld,” “Barry,” “black-ish” (the sole broadcast network sitcom nominated in the comedy category), “The Marvelous Mrs. Maisel,” “Unbreakable Kimmie Schmidt,” and others.

“Game of Thrones” got the most nominations of any individual series this year, which is no surprise, since this show is usually cited as Exhibit A whenever the pinnacle of quality TV production is discussed. It scores highly in virtually every category -- technical and otherwise -- which explains all the nominations.

The coverage of last week’s nomination announcement was also predictable. In the hours that followed, you came across headlines about Emmy snubs and also multiple stories that pitted Netflix against HBO in the contest for most nominations.

Netflix shows accounted for 112 nominations this year. HBO's shows had 108. Much was made of Netflix triumphing in this way. It was the first time Netflix topped the total-nomination tally.

What’s the significance? Probably not much -- except that it helps to cement Netflix’s position (which it had already attained) as the No. 1 competitor to all of TV, due to the piles of money it apparently has to pour into production, and its ability to produce shows that people talk about (and praise and nominate for awards).

For a long time, HBO stood at the top of this “most nominations” pyramid by (usually) large margins. So now, HBO has to share this spotlight with Netflix. May the best content provider win.

Actually, the winners are viewers -- specifically those multitudes who follow the critics and award nominations and would not think of missing any of the shows that emerge each year as the most talked-about shows.

These shows are mostly on Netflix and HBO with a smattering on Showtime, Hulu, Amazon, FX, a couple of other basic cable networks (such as “The Alienist” on TNT, for example) and a handful from the old broadcast networks.

One thing that characterized this year’s nominations (and also characterized the nominations for the last few years) was the quandary posed by shows that are difficult to categorize -- mainly so-called “comedies” such as “Atlanta” and “Better Things” (both on FX).

They are apparently not difficult for the Emmys to categorize, but for many of us, classifying shows such as “Atlanta” and “Better Things” as comedies makes no sense. If these shows are comedies, then they are keeping the comedy well-hidden.

Categorizing them should not be important, however. Just the fact that these hard-to-peg shows are being produced, aired and apparently watched in sufficient numbers to be renewed is evidence enough that TV has entered a new era in which content creators are being granted unprecedented latitude.

Feel free to nitpick about perceived snubs and any other Emmy errors in this year’s list of nominees. But the fact remains that the Emmy nominations -- in their happy confusion -- are a near-perfect reflection of the current state of television.