For Best Actor In A Comedy: Sacha Baron Cohen 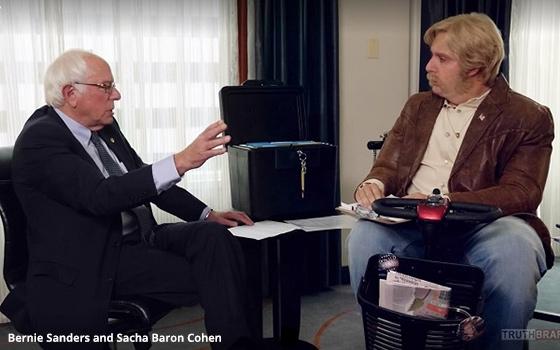 Sarah Palin didn’t turn up in the premiere episode of Sacha Baron Cohen’s new ambush-comedy show “Who Is America?” on Showtime Sunday night.

Instead, the “role” of the bamboozled politico in this episode was played by Bernie Sanders, who didn’t seem to realize he was being played.

That’s him in the screen-grab above being “interviewed” by Cohen in the guise of a newly created character -- a man named Billy Wayne Ruddick positioned as a pro-Donald Trump, right-wing activist who runs a Web site called Truthbrary.com. On the show, an explanation of the site’s name was provided: It evolved from the made-up word, “liebrary.”

There really is a Web site called Truthbrary.com. It was apparently set up by Cohen as a companion to this new show.

In the segment with Sanders, Ruddick talked nonsensically about a plan he has devised in which the ranks of the 1% would be enhanced by somehow moving the other 99% into the 1%, resulting in a “100%” in which everyone would be fabulously wealthy.

This discussion made no sense whatsoever, and Sanders admitted that he didn’t know what Ruddick was talking about.

Just the fact that Cohen got Sanders to schedule this interview appointment in the first place was comedic enough, but then the conversation got going and you couldn’t help but stare in disbelief (and also laugh).

As Cohen’s interviews with the powerful always attest, these people are almost genetically programmed never to say no to an offer to be interviewed, even by people like this fictional Ruddick character whom nobody ever heard of.

Cohen has been doing comedy like this for years, creating characters who then somehow arrange meetings and interviews with people from various walks of life, most notably high-ranking government and political figures.

Cohen’s best-known characters were the ones he created for his old HBO show “Da Ali G Show” -- the title character Ali G; Borat, the clueless “journalist” from Kazakhstan; and Bruno, the flamboyant devotee of fashion, celebrities and other categories of pop culture.

Cohen then made movies using all three of these characters. That could be the long-range goal of this new Showtime series.

The key to these characterizations is Cohen’s incredible commitment to playing them. With the help of hair, makeup, body padding and the like, Cohen submerges himself completely into each character.

He is much more than a comedian. In these roles, he shows himself to be a very accomplished actor, too.

In the premiere of “Who Is America?,” the range of Cohen’s acting skill is demonstrated in his portrayals of four new characters -- the aforementioned Billy Wayne Ruddick Jr. Ph.D.; Dr. Nira Cain-N’Degeocello, a middle-aged, left-wing academic and journalist who seeks to bridge the divide between Republicans and Democrats; Rick Sherman, an ex-con and self-trained artist whose medium of choice include waste products emanating from his own body, to put it delicately; and Erran Morad, a swaggering former member of the Israeli military (or intelligence services) who advocates the arming of schoolchildren as a method for preventing heinous massacres.

Where the latter viewpoint is concerned, here again the comedy stems from the amazement a viewer feels when observing what Cohen has accomplished.

In the segment with the Morad character, various former U.S. congressmen -- including Trent Lott -- were seen agreeing with this plan and actually endorsing the arming of children as young as three years old.

Indeed, Morad may have been the most fully realized character on the show, the one with perhaps the most potential for a full-length film.

A preview for next week’s episode suggested that the next politician to appear on the show will be former Vice President Dick Cheney.

As for Sarah Palin, she complained last week that she felt bamboozled by Cohen (and Showtime and CBS) after she flew all the way from Alaska to Washington for an interview with someone who was supposed to be a disabled veteran but who turned out to be Cohen in disguise (possibly as the Ruddick character).

The ethics of fooling Sarah Palin (or anyone else) into traveling all that way for a fake ambush interview is certainly debatable.

But like Sanders and many of the other politicos who Cohen has wrangled into participating in these uncomfortable interviews, Palin demonstrates that she’ll do just about anything for attention — even accept an interview invitation from someone who is not even real.