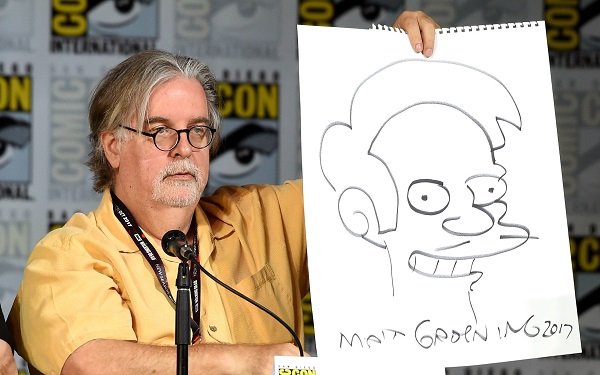 It’s a great honor to learn that Matt Groening and I feel the same way about today’s “outrage” culture.

Groening is the creator of “The Simpsons,” which has been taking heat in recent months for the character named Apu, the Indian-American proprietor of the local Kwik-E-Mart.

Critics have come out of the woodwork to complain about Apu’s accent (in a voice provided by actor Hank Azaria, who is not Indian) and other aspects of this cartoon’s characterization.

Groening commented on the controversy this week in an interview with The New York Times. “[It’s] something I’ve noticed for the last 25 years,” Groening said. “There is the outrage of the week and it comes and goes. …  I think particularly right now, people feel so aggrieved and crazed and powerless that they’re picking the wrong battles.”

The interviewer had asked Groening to clarify something he said in an earlier interview in April with USA Today about the Apu issue. Back then, Groening said: “I think it’s a time in our culture where people love to pretend they’re offended.”

This dovetailed with something I wrote on the subject of Apu, also in April. Groening used the word “pretend.” I used “feign.”

“This is the way writers and commentators of a certain younger generation express themselves these days,” I wrote, commenting on a critic who used, in my opinion, inaccurate, exaggerated, sweeping generalizations in a blistering screed she wrote slamming the Apu character for perpetuating stereotypes of Indian-Americans.

“[This commentary] is rarely measured or accurate,” I wrote. “One gets the feeling that at least some of the outrage they express in the media is feigned.”

In the Times interview, Groening also decried the loss of “nuance” in contemporary commentary. “It’s tainted now,” he said of the debate over Apu. “There’s no nuance to the conversation now. It seems very, very clunky.”

Groening’s “pretend” comment also reminded me of something Jerry Seinfeld said in 2015 about political correctness on college campuses.
Seinfeld’s comments came during an interview on ESPN Radio with Colin Cowherd. “Does the climate worry you now?” Cowherd asked Seinfeld back then. “I’ve talked to Chris Rock and Larry the Cable Guy. They don’t want to do college campuses anymore.”

“I don’t play colleges,” Seinfeld said, “but I hear a lot of people tell me, ‘Don’t go near colleges. They’re so PC.’

"I’ll give you an example. My daughter’s 14, my wife says to her, ‘Well, you know, in the next couple of years, I think maybe you’re going to be wanting to be hanging around the city more on the weekends so you can see boys.’ You know what my daughter says? She says, ‘That’s sexist.’ They just wanna use these words -- ‘That’s racist.’ ‘That’s sexist.’ ‘That’s prejudiced.’ They don’t even know what they’re talking about.”

“Yes, it does,” Seinfeld answered, which really cuts to the core of the problem.

The constant hectoring from those who disagree -- or, worse, mischaracterize -- what comedians and opinion columnists say and write and, in the case of Groening, what he draws and produces, can have an adverse effect on the creative process.

Creators who once felt free to express themselves in any way they saw fit, now find themselves thinking twice and reining themselves in. In the Times interview, Groening was asked if there would now be a moratorium on future appearances by Apu. “If we come up with a good story we’ll do it,” he said.

But he also implied that he feels uncomfortable even talking about the issue because of its potential for igniting even more criticism. “As many people have pointed out, it’s all stereotypes on our show,” he said. “That’s the nature of cartooning. And you try not to do reprehensible stereotypes. Anyway. I probably said too much.”