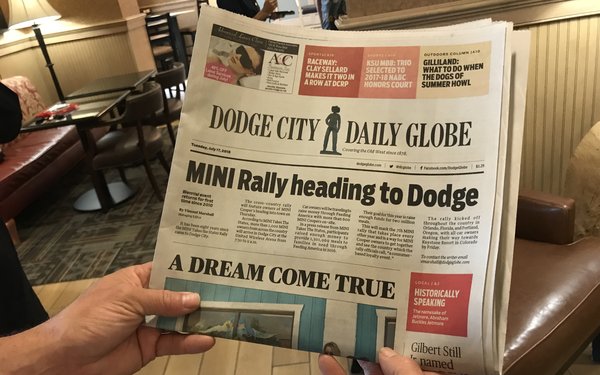 Mini takes a novel approach in engaging its customer base. There aren’t any other automakers who offer owners the option of a biennial road rally across the country.

The two routes of Mini Takes The States kicked off on July 14 on each coast — Orlando in the east and Portland in the west. Mini used the kickoff events to unveil the Mini John Cooper Works Hardtop International Orange Edition. The boldly colored, limited-production special edition will also be on display in Keystone, Colo., at the final gathering events July 20-22.

The two routes come together today in Keystone where owner events will continue through Sunday. Each leg of the rally, which averages 4-7 hours of driving per day, has attracted upwards of 500 vehicles so far this year.

Once arriving at Keystone, owners from both routes will have the weekend to trade stories, share their experiences, show off their Mini, explore the area on curated mountain drives, support Feeding America, the automaker’s charity partner and participate in activities planned by the Mini USA team.

This year's rally includes the return of several sponsors from the 2016 rally, Shell V-Power Nitro+ Premium Gasoline, Pennzoil with PurePlus Technology motor oil and Pirelli, which offers Mini approved star marked tires. New sponsors to the rally include Kind Snacks, Harmon Kardon and MapQuest, who will for the first time bring a custom turn-by-turn navigation application to MTTS.

Along with the navigation app, a second app allows for sharing of photos among participants, as well as information on the sponsors and the daily news.

The 2016 rally included a total of 4,500 participants and covered nearly 4,500 miles over the two weeks from Atlanta to Palm Springs. More than 750 Minis at a few points and nearly 1,000 participants traversed the entire

Tom Salkowsky, head of sales for the U.S. and previously the head of marketing for the U.S. quipped that Mini is the only auto brand that comes with readymade friends. Indeed, several owners reported getting “hooked” on the plethora of activities surrounding ownership.

Jenn and Will Hendrix from Greenville, S.C., traveled to Orlando last weekend for the kickoff events and are driving the entire route to Keystone in their first rally. They are a two-Mini family -- Will got his in 2015 and Jenn followed six months later. They are active in a local Mini club, which has about 250 members, 75 of which are very active as they are.

"We get together and are social, go on drives, raise money for the local animal shelter," Jenn Hendrix said. "It's a great group of people. We have a lot of fun."

The rally made news across the country this week. Local media reported some temporary traffic jams in Dallas as a result of the mass of vehicles while the daily paper in Dodge City, Kan., devoted the top of the front page story to the impending arrival of the compact sports cars. It has been eight years since the event traversed the small town. This year marks the seventh rally.

Feeding America, the nation’s largest hunger-relief organization dedicated to fighting domestic hunger through a network of food banks, is again the Official Charity Partner of MTTS 2018. Similar to the MTTS 2016 partnership, a portion of the proceeds from each registration fee will be donated to Feeding America. In addition, MTTS 2018 participants will have the opportunity to raise both money and awareness for the fight to end hunger in America. The owner who raised the most donations in the previously 24 hours is recognized at each of the rally day’s “Rise and Shine” event.