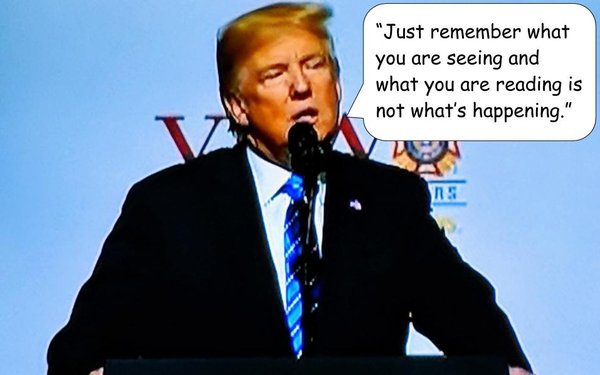 In his first full day on the job, President Donald Trump declared war on the media.

In recent weeks, he and his White House have declared war on the truth, altering official White House transcripts, as well as a video on the White House’s official YouTube channel, to distort the meaning of a statement made by Russian President Vladimir Putin during their joint press conference in Helsinki.

The White House, which has persistently described objective news reporting by America’s most venerated news organizations as “fake news,” has actually been disseminating a distorted official record of what took place during the historic summit. Specifically, when Reuters’ reporter Jeff Mason asked Putin if he wanted Trump to win the 2016 presidential election and whether he “instructed” Russian officials to help.

"Yes, I wanted him to win, because he talked about the normalization of Russian–American relations,” Putin replied during the live press briefing.

However,  in the White House’s transcript and YouTube video, Mason’s question asking Putin whether he wanted Trump to win was edited out, and only the second part of his question -- “And did you direct any of your officials to help him do that?” -- was used, with altered version of Putin’s reply edited to read and sound: “Yes, I did.  Yes, I did. Because he talked about bringing the U.S.-Russia relationship back to normal.”

“Just to be clear, there is no justification under any circumstances for the White House to be putting out a video of an event that happened and altering it in any way whatsoever, to their interest or not to their interest," MSNBC national affairs analyst John Heilemann commented this morning on “Morning Joe.”

He noted there is only one version of this reality. The question was asked and the answer was proffered.

"That’s the only version our White House should be putting out on its YouTube channel or in any of its official government mechanism or media that exists,” he added, during a segment discussing the White House’s attempt to alter the official historical record. Presumably, it's because Putin’s verbatim response to Mason’s question would be deemed compromising in some way.

The timing of the expose is also interesting, given a statement made by President Trump during an address to the Veterans of Foreign Wars in Kansas City on Tuesday, at which he said: “Just remember what you are seeing and what you are reading is not what’s happening.”

Trump was referring to press coverage of his tariffs policies and the impact of a potential trade war on the economy. But his statement struck an Orwellian nerve for many observers and commentators, especially given the White House’s apparent efforts to distort the official historical record.

When Trump got elected, I wrote a column about a growing phenomenon in society called the “Mandela Effect,” which are cases where a significant percentage of the population misremember actual historical facts, and made a case for how newly inaugurated President Trump would, in effect, create his own “Trumpela Effect,” via his direct-to-consumer media distortions.

The altering of official White House media records, is an excellent example.