Question For Alex Trebek: Will He Continue At 'Jeopardy!'? 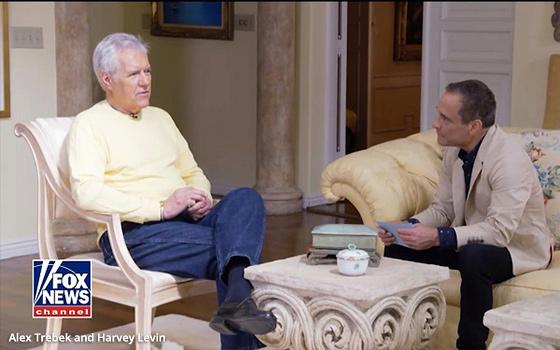 Alex Trebek says the odds are a “little less” than 50-50 that he will continue as the host of “Jeopardy!” after his current contract expires in 2020.

He talked about his future in a one-hour interview that was seen this past Sunday night on “OBJECTified,” the weekly interview show hosted by TMZ's Harvey Levin on Fox News Channel (photo, above).

The show's title, with “OBJECT” in all caps, is designed as an up-close-and-personal look at a celebrity’s private life, with an emphasis on objects in his or her home that have special significance.

In this episode about Trebek, which was taped in and around his Los Angeles home, the personal objects included an original pair of oversized dice from one of Trebek's game-show successes, “High Rollers,” and a sculpture of a musk ox, Trebek's favorite animal.

Published reports in the last few days made it seem as if Trebek, 78, said definitively that he will be leaving “Jeopardy!” when his contract is up. As usual, the stories omitted crucial details of his conversation on this subject that indicated he is still far from making a decision.

Here is the entire conversation he had with Levin on this subject. Trebek even recommended two people as possible replacements for him.

Levin: Your contract is up on “Jeopardy!” in 2020. Can you imagine a life without “Jeopardy”?

Levin: Who would be a good solid host of the show if you retire?

Trebek: I mentioned to our producers not too long ago that the fellow who does play-by-play for the Los Angeles Kings [Alex Faust], they should consider him. He's young. He's attractive. His first name is Alex. It wouldn't be a big hardship for [“Jeopardy!” announcer] Johnny Gilbert to say, ‘And now, here is the host of “Jeopardy!” Alex Not Trebek!

Levin: What about a woman?

Trebek: There is an attorney, Laura Coates, who's African-American and she appears on some of the cable news shows from time to time. Very bright, very personable.

Levin: What factors go into your decision about whether to hang it up in 2020?

Trebek: If I'm still enjoying it and if I'm not making too many mistakes, then I will continue. But there comes a time, of course … Bob Barker is a perfect example. He was still doing well, but he figured, hey, the time is now. [Barker retired from "The Price Is Right" in 2007 at age 83.] And in life we make a lot of decisions about what we want to do and whether to accept a job, and you should also be able to make an intelligent decision about when it's time to hang things up.

Athletes are forced to do this all the time. They realize, "Hey, my skills have diminished just [a little bit], but in this day and age, in this league, whether it's basketball, football, hockey or baseball, that’s enough. I can no longer compete at a level that makes me feel good about my performance."

Levin: What are the odds that you will stay after 2020?

Levin: You're supposed to say thank you!