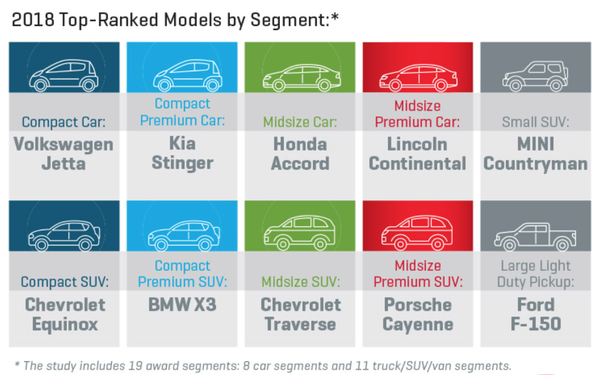 The Lincoln Navigator posts the highest score (915) of any model. This is also the highest level recorded in this generation of the study (2013-2018). The U.S. APEAL Study, which was first published in 1996, is currently in its third generation.

Chevrolet and GMC are the highest-ranked mass-market brands while Ford receives four segment-level award with a score of 826. This is the first time either brand has ranked highest. Ram ranks third (825), followed by Dodge and Ford (824 each). Mitsubishi is the most improved brand, increasing 33 points from 2017. Other brands showing substantial improvements are Dodge (+29), Jeep (+26), GMC (+18) and Chevrolet (+16).

Conducted annually, the study measures owners’ satisfaction with their vehicle’s performance, styling, comfort, features, and usability after 90 days of ownership. It covers satisfaction, likes, and dislikes for 77 vehicle attributes across 10 categories. In the 2018 study, 176 models from 31 brands are ranked.

“The automotive industry is performing exceptionally well, with manufacturers making record-breaking improvements year over year,” said Dave Sargent, vice president, global automotive at J.D. Power, in a release. “It’s a great time to buy a new car or truck. There are a lot of high-quality, appealing vehicles in every segment of the market, and shoppers don’t have to spend a fortune to get one.”