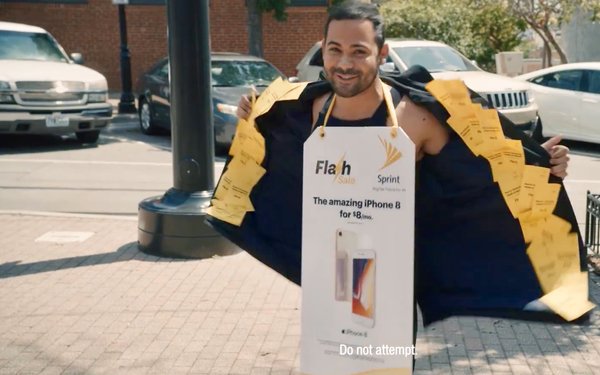 Sprint customers, new or existing, now can get an iPhone 8 for $8 a month with a Sprint Flex lease, but it requires an 18-month-long lease and offers a one-time $21.17 credit. New customers get that deal; existing customers get it only by adding a line.

The new promotion starts today and lasts only until Aug. 9 by applying online or over Sprint’s toll-free number.

The new phone, with 64GB, is a lease, meaning that after the contract period, consumers will give back the phone or buy it outright. The phone listed for $700 when it was released last year.

Previously, Sprint and other carriers were discounting the iPhone 8 for $22.91 over 24 months.

And currently, Sprint’s website is still offering an 18-month lease on the most advanced iPhone X, for $20 a month, with its own strings attached, and other deals.

The new offer is called Sprint’s Flash Sale, and the wireless company is promoting it with a YouTube video showing two people “flashing” passersby by opening their overcoats to reveal details of the deal.

In April, T-Mobile announced a $26 billion merger and in arguments at a hearing of the Senate Judiciary Subcommittee on Antitrust, Competition Policy, and Consumer Rights, Sprint has pointed out that, without it, neither company will have the horses to upgrade to 5G services by themselves.

Sprint has been aggressively trying to add to its customer base and improve coverage. Earlier this month, it added a batch of new “unlimited” service plans that, in fact, seemed to be cutting back on $15-a-month deal that was so good, it was discontinued after just seven days.