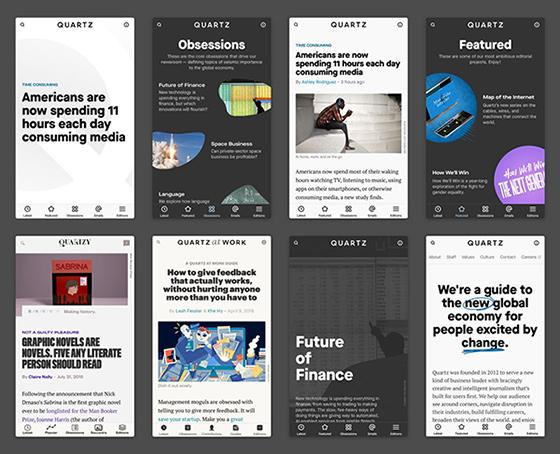 The unveiling of an updated QZ.com site coincides with the first official day Quartz is operating under its new owner, the Japanese-run Uzabase.

Redesigns are not uncommon at the business news outlet. This is the fifth full redesign of QZ.com in the six years of the site’s existence. (Most recently, Quartz designed a new homepage for the site at the end of 2015.)

“That unusually rapid rate of change is a deliberate part of our strategy,” wrote Zach Seward, Chief Product Officer-executive editor, in his welcome note to the revamped site.

The redesigns “help make product development more efficient, avoid technical debt, and quickly adopt new web technologies. It also helps us stay true to what editor-in-chief Kevin Delaney wrote on day one: ‘We view the creation of Quartz as just the beginning of an ongoing process,’” he wrote.

The site has a new headline font, “bolder” visuals and a cleaner look. It also unifies all of Quartz’s editions — Quartz, Quartz India, Quartz Africa, Quartz at Work, and Quartzy — into one format.

Emails have “a more prominent home in this new version, too,” Seward wrote.

The site is faster as well, “We’ve always put a focus on page speed and site performance ... this version is another huge leap forward in that effort,” he added.

This isn’t the only unveiling at Quartz this year. In July, the publisher launched “Quartz News,” a weekly news show on the global economy available on the Facebook Watch platform.
email, redesign, web sites
Next story loading