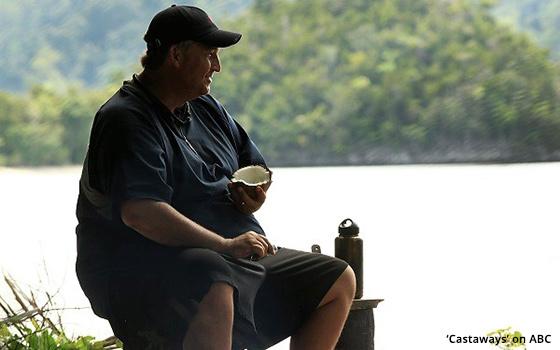 There is no way that a so-called reality show called “Castaways” is going to evade comparisons and references to “Gilligan’s Island” in this review.

Ain’t gonna happen. Not on my watch.

“Castaways” is a reality show premiering Tuesday night on ABC in which 12 participants have supposedly been stranded along a string of deserted islands somewhere in the South Pacific.

The 12 are stranded, that is, except for camera crews, production personnel and presumably, boats and aircraft from which many shots of the islands and surrounding waters have been produced.

In other words, when watching a show like this, I often wonder if these people who are supposedly starving are in reality just steps away from tables laden with food for the production staff.

Despite my best efforts to mention “Gilligan's Island” here as often as possible, “Castaways” is not like “Gilligan” in at least one important way: “Castaways” is utterly humorless -- unless you count the laughter you might emit occasionally in disbelief.

The premiere episode of this one-hour summer series starts with some explanatory narration. “There are only two ways to escape the islands,” says a narrator. “Survive until the rescue team arrives or quit.”

That seems inaccurate. Other means of escape could include hitching a ride with astronauts who suddenly arrive on the island, or a rock band, or any other number of people with whom the “Gilligan” castaways might have left their island if not for Gilligan screwing up every opportunity for escape.

No Gilligan-type character emerges on “Castaways” in the premiere episode. Indeed, in this show, the castaways are not thrown together on the same island initially, but must set out to find each other in other parts of this island string.

The premiere hour, which I previewed, was one long slog. Once again, the thought occurs to me: Why are networks so enamored of one-hour reality shows?

Expecting viewers to remain interested in this show for an entire hour seems like too much to ask of anyone, especially a viewing experience as dull as this one.

As everybody well knows, “Gilligan’s Island” was a half-hour -- and few half-hours in the history of TV were ever as enjoyable.

In fact, just the number of castaways in this new reality show -- 12 -- indicates that the producers of this show took no scholarship from the career of the great Sherwood Schwartz.

Schwartz, the creator of “Gilligan’s Island,” once explained to me that odd numbers were better than even ones when assembling a cast of characters.

To him, an odd number such as seven on “Gilligan” and nine on “The Brady Bunch,” his other renowned creation, made for a greater number of mathematical possibilities when it came to meeting the challenge of coming up with storylines for all the episodes he would have to produce.

He explained this mathematical formula to me, but I’ll be darned if I understood it. Ya gotta love TV, right?

Meanwhile, in the premiere of “Castaways,” no explanation is given for these people being stranded in this remote location.

Part of the set-up is that they will invariably come across some luggage belonging to someone else -- as if they arrived here as the result of an airline crash or cruise ship disaster.

The whole thing simply cannot be taken seriously, except perhaps by the CBS legal department, which once upon a time used to sue, or threatened to sue, other shows that seemed like “Survivor.”

“Castaways” does seem like “Survivor” in some ways, but it also bears a resemblance to “Naked and Afraid” and any other number of these kinds of shows whose titles, like the shows themselves, are forgettable.

In the premiere episode of “Castaways,” no one nicknames a volleyball Wilson either.