This Summer's 800-Pound Gorilla In The Room: Les Moonves 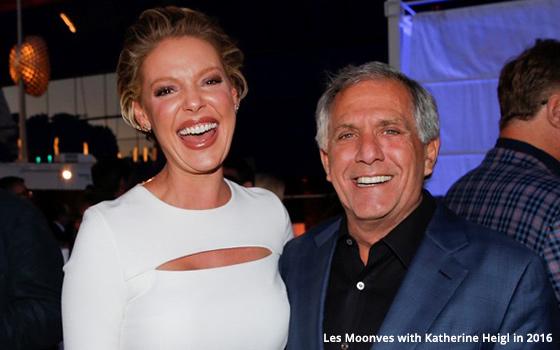 This is the time of year every summer when many of the nation’s journalists on the TV beat gather in Los Angeles to shamelessly help promote the network’s new fall shows.

It is known as a press tour -- overseen by the Television Critics Association -- and it involves a schedule of press sessions staged by the networks, both broadcast and cable, which each get a day or two to strut their stuff.

The press events include question-and-answer sessions with the cast and producers of various new shows, and similar opportunities with the networks’ top programming executives.

There are also dinners, receptions, parties and set visits that are designed to generate excitement for the new shows among the press. The networks hope this excitement will translate into sparkling feature stories published and posted in the next few weeks in the nation's newspapers (what's left of them) and on entertainment news sites.

This summer, where CBS is concerned, there is a new wrinkle. Leslie Moonves, chairman and CEO of CBS Corp. -- who many in the TV press corps seem to greatly admire and look forward to rubbing elbows with whenever he appears at a press event -- is embroiled in a sex scandal in which his job and the future direction of CBS is at stake.

Thus, some of the execs at CBS press tour events have had to field questions about their boss, when they would much rather be talking about their upcoming shows (which they did get a chance to talk about eventually).

In case you forgot, Moonves, 68 (seen in the photo above at a 2016 press event with Katherine Heigl), stands accused by six women of various acts of sexual harassment (and possibly assault) who told their stories in an in-depth investigative story by Ronan Farrow that was published last week in The New Yorker. It is quite a story and I highly recommend that everybody read it.

At the press tour this week, CBS Entertainment President Kelly Kahl had to answer questions about Moonves, to whom Kahl, in many respects, owes his career.

As reported by our Wayne Friedman, Kahl demurred at first, saying, “The scope of what I can talk about is limited” on that subject. Indeed, to help evade the subject altogether, CBS reportedly considered cancelling its press tour sessions since the news of the New Yorker story and its allegations against Moonves first surfaced late last month.

But to his credit, Kahl expanded on that answer. “Obviously, this has been a tough week at CBS,” Kahl said. “There are literally thousands of producers, writers, actors, crew -- not to mention all the people at CBS -- preparing for months to launch the fall season.

“A number of colleagues came to me this week and said they were saddened by what they read,” Kahl is quoted as saying. “They said it does not represent their experience at CBS. We are not saying we are perfect. No large company is.”

At another session, this one put on by Showtime (which is owned by CBS), CEO David Nevins stated at the outset that he cannot talk about the Moonves situation. “I understand you may have questions to which you want answers and I do too,” Nevins is quoted as saying in a story on Deadline.com. “I hope you understand those types of questions I simply won’t be able to answer.”

Meanwhile, at a CW session, CW President Mark Pedowitz also evaded questions about Moonves. The CW is co-owned by CBS and Warner Bros.

“Les is a great executive and they will determine what best happens,” Pedowitz reportedly said in response to questions about the Moonves sex scandal.

On the subject of determining what will happen, Pedowitz was referring either to his corporate overseers at both companies, or the law firms conducting independent investigations of the Moonves allegations.

Moonves has apparently adopted a strategy, for the moment at least, in which he hopes to hang on. CBS’s official reaction to the New Yorker story and its fallout has come in the form of several carefully prepared statements.

In a statement on July 27, the CBS Board of Directors dutifully declared it would take the accusations seriously. Then, on August 1, the board issued a statement reporting that it had hired the two law firms to perform investigations.

That statement ended with this: “Neither the Board nor the Company expects to comment further on this matter at this time.”