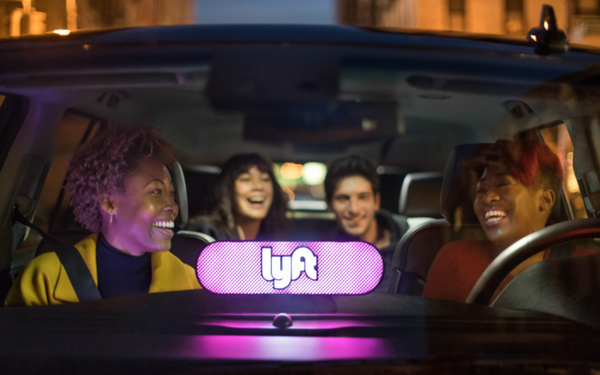 Twenty years ago, nobody ever said that yellow taxis were going to put the automakers out of business, or even take away any sales.

You hailed a cab when you couldn’t use your own vehicle or mass transit wasn’t available, or even if it was, you were in a rush or wanted some peace and quiet.

Now, many Millennials and even Gen Xers would just as soon fire up their smartphone and order a Lyft or Uber or Via instead of driving, period. If you’ve got several friends to split the cost, or have been drinking, it seems like an even better idea.

I was just in Traverse City, Mich. for the weekend for the annual film festival founded by Michael Moore and found myself in one of those situations.

It’s an earth-friendly event, there are teams of volunteers to sort every scrap of trash from the theaters into various recycling containers. This year they jumped on the “no plastic straws” bandwagon and offered stainless steel versions for sale for $1. Although most of the theaters are in walking distance of each other, there are free shuttle buses which do a loop around the half dozen or so venues.

The only problem is when attending one movie runs over and you have inadequate time to get to your next movie. I found myself in that situation after I lost track of time listening to Dick Cavett talk about a new documentary in which he is featured about his relationship with Muhammad Ali. I needed to get  2.5 miles across town and my car was not near and I wasn’t sure I’d have time to wait for the shuttle bus.

Last year, none of the ride-sharing services were operating in town, which was kind of mind-blowing, and there are very few taxis  But upon checking this year, it appeared both Lyft and Uber are available, although not exactly swarming with drivers. Still, when quaint “up north” Traverse City gets ridesharing, the automakers might have reason to worry. My amicable driver, who was fairly new to Uber, got me to my venue with plenty of time. He said business is booming in the resort town and he could drive constantly if he wanted.

There’s a new twist to the mobility equation this week with Avis Budget Group and Lyft announcing a partnership. No longer in competition with each other, rental car companies are facing the reality of car sharing and perhaps thinking “if you can’t beat ‘em, join them.”

Avis will start providing rental cars to Lyft drivers under an agreement announced today. The partnership will make it easier for people to drive with Lyft without the cost of car ownership. The two companies said thousands of vehicles will be available for the program during the next few months in several cities across North America. Lyft drivers will be able to reserve a car from Avis directly through the Lyft app.

"With a global fleet of approximately 600,000 vehicles, we are well positioned to take advantage of the continued growth in the ride-hailing space by providing on-demand access to a clean, safe, and well-maintained vehicle for those who want to become ride-hailing drivers," Joe Ferraro, president, Americas, Avis Budget Group, said in a statement. "We look forward to working with Lyft to address the growing demand for transportation in key markets, and to further leveraging our assets."

Avis hasn’t had its head buried in the sand when it comes to changing mobility patterns. The company bought  Zipcar in 2012 and also partnered with Waymo to provide maintenance services for its fleet of vehicles in Phoenix.

In other mobility news, the New York City Council is expected to vote next month on a series of bills concerning ride-hailing vs. ride-sharing services. The council is considering five bills and each is aimed at reducing traffic congestion and increasing driver paychecks. Sadly, there have been six suicides recently by financially strapped yellow taxi drivers, according to the New York Business Journal.

One bill imposes a one-year freeze on new licenses for Uber and Lyft drivers. During that year, the mayor’s office will study the impact of on-demand services and if specific areas of New York City are inconvenienced by the cap. Some civil rights groups say the cap will hurt New Yorkers, particularly minorities, and their ability to get around. The groups, which say there is evidence that yellow taxi cabs are less likely to pick up minority riders, are joining Uber and Lyft to oppose the proposed license cap.

While congestion is a real problem in all major cities, it strikes me as somewhat paternalistic that the government is getting involved in the competition between traditional taxis vs. Uber and Lyft and their peers. Isn’t the open marketplace the place for survival of the fittest? Just like the automakers (and rental car companies) are having to come up with creative solutions to compensate for the effect ride-sharing services have on their business, perhaps the taxi drivers association should consider doing the same.

apps, automotive
1 comment about "Uber, Lyft Are Literally Everywhere".
Check to receive email when comments are posted.
Next story loading