4 Rookie Shows Will Attract The Most Attention This Fall 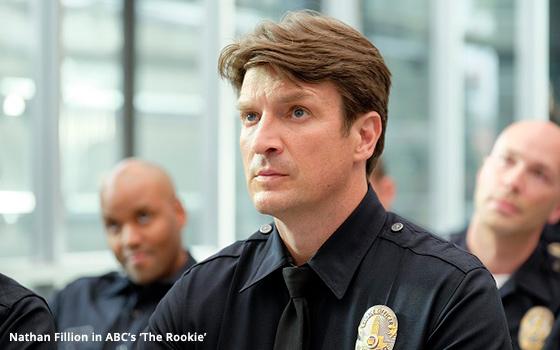 One rookie show has all of this fall’s new network shows beat, but two revivals with roots in a bygone age will be the most closely watched debuts of the new TV season.

The rookie show is called "The Rookie" on ABC, starring Nathan Fillion (pictured above), formerly of ABC’s "Castle."

I am not supposed to say this, since the networks would prefer critics refrain from sharing our impressions of the new fall shows until we have seen the completed premiere episodes they will soon provide.

But based on the "Rookie" pilot, I am sure ABC will not mind my saying that of all the new fall shows I have seen so far, this one emerges as the most likely to be a surefire hit. It has what you might call old-school TV charm.

Fillion plays a guy in his 40s who seeks a change in his life and career — and decides to join the LAPD. He then becomes the oldest rookie on the force. Fillion is great in it. "The Rookie" premieres Tuesday, October 16, at 10 p.m. Eastern.

However, greater attention will be paid to this fall’s prime-time retreads -- CBS’s "Murphy Brown" and "Magnum P.I." reboots, and ABC’s desperate,Hail Mary spinoff of "Roseanne," "The Conners."

"The Conners," of course, is the show that ABC hastily put together after Roseanne Barr got herself fired at the end of May after her now infamous "Planet of the Apes" tweet.

This show will feature all the other Conner family members in what feels like a desperate bid to maintain and continue the phenomenal success of last season’s "Roseanne." But one wonders how on earth this can be achieved without Roseanne herself. For better or worse, she was the charismatic centerpiece of the project.

Without her and her unpredictable points of view, there will likely be no thrill in tuning in to watch "The Conners" every week.

Nevertheless, the show will premiere earlier on the same evening as "The Rookie" -- Tuesday, October 16 -- at 8 p.m. Eastern. Look for "The Conners" to be widely covered for at least a few days, both before and after it premieres.

On CBS, the new "Murphy Brown" is scheduled to premiere on Thursday, September 27, at 9:30 p.m. Eastern. No pilot was produced for this show, which evidently went straight to series based on the idea alone.

The "idea" is that Murphy and her cohorts (most of whom are coming back) are still in the television journalism business, although TV audiences have not seen them since 1998.

Today, these refugees from 1990s media will be coping with all the changes that have remade the nation’s news media -- most notably, the role of social media in driving the national conversation about current events.

But herein lies the problem. How in the world will the show explain how this group, now 20 years older, maintained their employment in this radically different news industry?

Here in the real world, few people who were thriving back then in the old media of TV news (plus newspapers, magazines and other forms of once-prevalent media) would be in those same jobs today. At the very least, such examples are exceedingly rare.

What then, will the main thrust of this new "Murphy Brown" be? It might be reasonable to assume it will consist chiefly of Murphy and her fellow news veterans making sarcastic comments about the habits and lifestyles of millennials.

Whatever it is, this new "Murphy Brown" will likely do nothing to lower the median age of CBS’ audience. It might actually achieve the opposite.