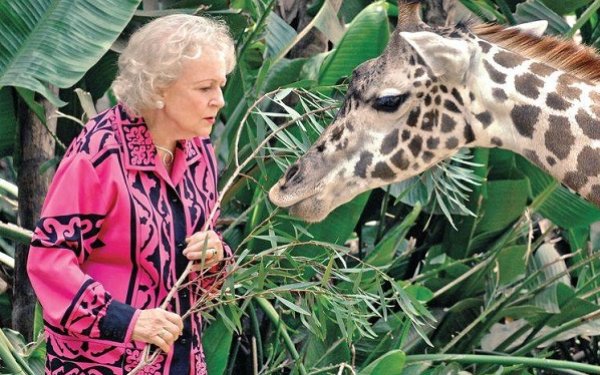 Betty White turned 96 last January, and this week, PBS is honoring her with an hour-long special about her life and career that took 10 years to put together.

Jack Narz, veteran TV quiz show personality, may have been one of the first subjects to be interviewed for this show. He died in October 2008.

Other co-stars from “Mary Tyler Moore” seen in the special include Valerie Harper, Georgia Engel and Gavin MacLeod -- all very much alive.

Sadly, none of White’s three co-stars from “The Golden Girls” -- Bea Arthur, Rue McClanahan and Estelle Getty -- are with us, so they were not available to talk about what it was like to work with Betty.

Other interview subjects on hand to give testimony to Betty White’s greatness include Carl Reiner, Tom Sullivan (the blind singer is a personal friend), Alex Trebek and others.

White is also seen in the show, of course, in many clips from her long career and in contemporary interview segments.

The show more than adequately makes the case for White’s “First Lady of Television” status. She might actually have been, literally, the “first” woman in television, or at least one of them.

White has been seen regularly on TV since its infancy; 1949 is generally the year given for her first regular TV work, but one interview subject points out that she did her first audition for TV in 1939, before it was really anything.

Among the things you will learn about her if you watch this show (unless you knew them already) is that her childhood idol in Hollywood was Jeanette MacDonald.

You will also hear the full stories of how she met and eventually married Ludden, and how White became the first (and possibly still the only) woman to ever win an Emmy Award for hosting a game show. The show was a 1983 NBC show called “Just Men!”

White is also well-known as an animal lover and animal rights activist. In the photo above, she is seen making friends with a giraffe.

White is justly positioned here as a pioneer in television. In her earliest work in the 1950s, she was often producer and star, something that was rare for a woman (but not entirely unheard of).

In this special, as in others like it, some of the fascinating portions are the ones about early television -- its live aspects and its commercials, which the star of the show presented personally as part of each live telecast. In the special, you’ll see Betty do a live spot for Geritol on a talk show she hosted.

Certainly, her “First Lady” status has to do, at least in part, with the long length of her life, and the fact that she seems still spry enough today to continue working. She has been around so long that, as mentioned above, many of the people she knew and who knew her are no longer alive.

But as this special demonstrates, Betty White has been nothing if not resilient. She is well worth saluting.