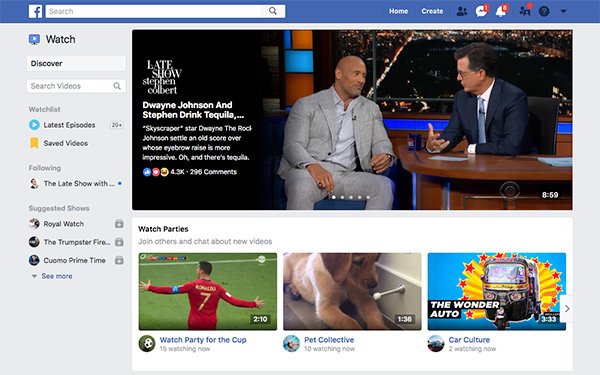 According to research from The Diffusion Group, half of all Facebook users in the U.S. have never heard of Facebook Watch, while 24% have heard of it, but haven’t used it.

The survey also found that 21% of Facebook users watch programming on Facebook Watch monthly, 14% watch weekly, and 6% watch at least once per day.

Facebook Watch features a mix of original programming, ordered by Facebook, as well as programming provided by its partners. In general, the programming is premium in nature, with reality shows, competition programs and scripted fare on the service, spanning short- and long-form.

Despite the seemingly modest interest from users, TDG’s president Michael Greeson says that “it would be remiss to underestimate Facebook's long-term potential as a large-scale video provider.”

"As we first noted in 2016, prominent social platforms like Facebook are looking for ways to exploit their massive scale to sell new video services to their users, much as Amazon has done with Prime,” Greeson adds. “Watch is a small first step in that direction, as is the $1 billion Facebook set aside in 2018 to fund original programming to populate the service.”

In other words, Facebook is working around the clock to create a video service that can compete with the likes of YouTube, and traditional TV providers. Whether Watch turns into that service is a question still to be answered.