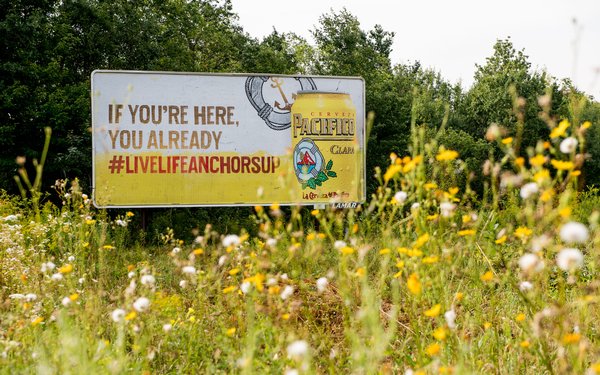 No brand wants to have billboards in places nobody will see.

Well, maybe one brand does.

Pacifico, the Mexican brew owned by Constellation Brands, has placed five billboards in spots that are in remote areas helping to promote its “Live Life Anchors Up” campaign that extols enjoying a brew while hanging out at natural locales. Lots of eyeballs weren't the goal.

For example, if you can find Pelican State Beach -- reportedly called “the loneliest beach in California” -- then you will probably find the Pacifico billboard that reads, “If you’re here, you already #LiveLifeAnchorsUp”

The billboards are also up in Newport, Va., on the way to the Smoky Mountains (which got two billboards); in Malone, N.Y. on the way to the Adirondacks; and in Laurium, Mich., near Copper Harbor. Their taglines include, “Welcome to the path less taken,” and “Here’s to finding places others won’t.”

Pacifico’s Matt Escalante, senior director of brand marketing, says Pacifico turned to out-of-home ad agency Delta to locate billboards that, well, wouldn’t be so easy to locate. But Escalante stresses the brand was “very cautious in selecting the precise locations for these billboards. We understand that adventure seekers don’t want to be bombarded with ads while enjoying the great outdoors, which is why we strategically placed them [only] on the route to these destinations.”

The billboards just went up in August and are a tiny part of a larger campaign from Cramer-Krasselt that includes some TV ads with the same taglines. Those launched in April.

It’s the first national ad effort by Pacifico, a brand’s that’s more popular in the West than in the East. For example, Escalante says Pacifico is the sixth-best-selling beer in California.

In the changing beer market, Escalante says, Pacifico aims at craft beer drinkers when they’re searching for a beer with a lighter touch. It also pushes itself at outdoorsy types.

“We know that these  won’t be seen by even 1% of the people who could see a billboard we could put up in Los Angeles,” Escalante tells Marketing Daily. “But it fits our campaign because it’s the quality of the billboard location, not how expensive it is.”