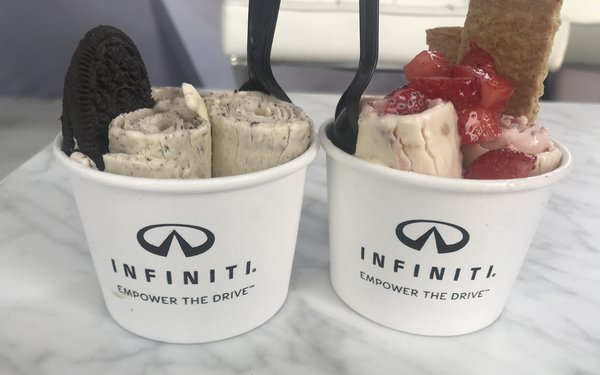 While the Pebble Beach Concours d’Elegance is the Super Bowl of classic cars, it and other Monterey Car Week events are attractive to non-automotive brands. Still, the automakers remain front and center.

The Quail, a Motorsports Gathering now in its 16th year, takes places on the lawns of the Quail Lodge & Golf Club in Carmel Valley, Calif., and features more than 200 of the collector car world’s rarest cars. It attracts a slew of sponsor and participant brands, including The Peninsula Hotels, Rolex, Louis Roederer Champagne, Learned Helicopters and Delta Private Jets.

Delta offered samples of its signature cookie, the XL-sized Lotus Biscoff, along with taking red carpet-style photos of event goers against a Delta Private Jet-themed background. Prints of the photos were available immediately and were framed in a Delta-themed picture frame. Attendees could also post the photos on social media and send them via email or text message.

Infiniti, via an activation created by Motor Trend Group, showed off its Prototype 10 concept car, an electrified speedster along with the Q Inspiration concept. Attendees were treated to rolled ice cream served in Infiniti branded cups, which they could eat while watching a compelling video montage of the previous Prototype 9 concept car on a racetrack and other production version vehicles including the QX50.

Porsche created a display celebrating 70 Years of the Porsche 356, featuring both a vintage and current model to showcase the automaker’s history and legacy in the form of the marque’s first production sports car. Perhaps to add a lighter side to the display, attendees could play custom Porsche-themed Jenga or Cornhole.  Porsche also had a second and much larger temporary structure featuring more vehicles.

Vehicles revealed over the weekend include a refreshed Acura 2019 NSX. The brand’s halo supercar can now be finished in the hard-to-miss Thermal Orange, which can be paired with orange brake calipers. There is also a new interior option: indigo blue semi-aniline leather with Alcantara accents.

Ford unveiled its 2019 Ford GT Heritage Edition on Friday during the Rolex Monterey Motorsports Reunion at the WeatherTech Raceway at Laguna Seca. The annual event offers a venue for historic race cars to compete.

The vehicle celebrates the 50th anniversary of the 1968 and 1969 Le Mans-winning GT40 with limited-edition Gulf Oil tribute racing livery. The blue and orange paint scheme led to other similarly painted cars across many race series globally over the past half-century. The Interior of new 2019 Ford GT features exclusive colors, materials and appointments, including a seat pattern reminiscent of the 1968 GT40 Le Mans winners. The vehicle also was shown during another Monterey Car Week event, the Exotics on Cannery Row parade.

Rolls Royce rented a private villa in the Del Monte forest near the Pebble Beach Golf Course to hold a series of private events during the week. Those in attendance Saturday night included longtime Rolls Royce owners and the media, who were treated to a veritable fashion show of Rolls Royce vehicles including the ultra-luxurious Cullinan SUV, which made its American debut.

Accompanying it were new bespoke designs in Rolls-Royce's Black Badge collection: The Umbra, Paradiso and Nebula. In addition, a bespoke creation named “Phantom in Fuxia” was presented to collector Michael Fux, who already has nine unique Rolls-Royce creations.