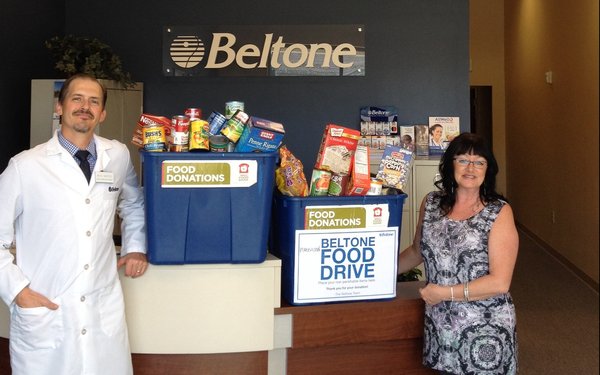 Beltone, the hearing-aid brand, just kicked off its third annual Food Drive at more than 1,500 locations, mindful that not only do the elderly need hearing care, but that an increasing number of them are hungry, too.

Through September, drop-off bins will be placed at Beltone Hearing Centers nationwide and at Beltone’s north suburban Chicago headquarters. Everyone who donates will be offered a free hearing screening, and a spokesman says that at the end of the drive locations with the biggest haul will win the chance to give away new Beltone units. (The company owns some of its stores; independent operators run the rest.)

That older people develop hearing issues is not news, but that elders face problems putting food on their tables may be less well-known.

According to the organization Feeding America, the rate of hunger among Americans 60 years old or more has increased by 45% since 2001, a circumstance the group attributes to the recession and its lingering after-effects. Aging In Place, a unit of the National Council For Aging Care, estimates one in six senior citizens has what it terms “the threat of hunger.”

“We are dedicated to helping improve the quality of life in the communities where we live and work, and that doesn’t stop with hearing,” said Stephen Brinkman, Belton’s director of customer care.

I’s also true that approximately one in three people between the ages of 65 and 74 has hearing loss — and nearly half of those older than 75 have difficulty hearing, according to the National Institute on Deafness and Other Communications Disorders.  So the food donations, in part, will be going to the portion of the population that is at the center of Beltone’s business.

Selling hearing aids has its built-in obstacles. The would-be user often resists the suggestion, vehemently, and there is a stigma attached to the devices, as if they are an official sign of old age in a youth-obsessed culture. What’s more, hearing aids are usually not inexpensive. “Talk about making it hard,” the Beltone spokesman says about the path to a sale. The idea that a food donor might then consent to a initial hearing test at least eases the process a bit.

Beltone will also make a financial donation to Feeding America, which gives food assistance to 46.5 million people every year. including 12 million children and and 7 million seniors. “We hope these efforts help jump-start much-needed contributions during a time of year when food bank giving can slow down,” Brinkman says.