This Holiday, Will Brands Be Lost In Toyland? 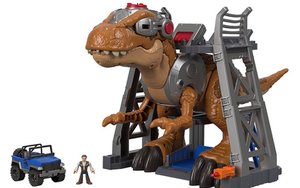 As toy brands gear up for the holiday season without a national toy store to flex their marketing muscles, Walmart and Target are scrambling to fill the Toys R Us gap. But despite those expanded options, some experts predict toy sales will actually see a decline.

The absence of Toys R Us “is going to change things,” says Richard Gottlieb, founder and CEO of the Global Toy Group, a consultancy for the toy industry. “When you go to the toy show in Nuremberg, Germany, you see one million unique toys. In Europe, the world of play is much bigger. In Walmart or Target, it’s more like a few thousand.”

He tells Marketing Daily that the limited selection shifts the focus to the kinds of popular toys heavily advertised on TV or YouTube. “The element of surprise has gone out of toy purchasing,” he says. So rather than having any sense of wonder or discovery, consumers “walk into stores knowing what they’re going to get.”

But retailers are trying. Target has released its list of top toys, including an even bigger L.O.L. Surprise! doll, and a plush spin on the Fingerling craze. And it says it’s offering some 2,500 new and exclusive toys, almost twice as many as last year. Target’s also retooled its site to showcase toys by trends, making it easier for parents to get inspired.

Walmart is expanding aisles, adding more toys (a 30% increase in stores, and a 40% jump in those sold online), as well as adding in-store events and demos for shoppers to test items. (It’s promising 2,000 toy playdates at supercenters around the U.S.) A new approach online includes content from toy influencers, a first for the retailer.

The NPD Group, a market research company, recently reported a 7% jump in toy sales for the first half of the year, and is predicting sales will continue to be strong through the end of the year.

Gottlieb disagrees. “Toys R Us essentially dumped its inventory over a three to four month period, and at heavily discounted prices. How many Christmas presents were purchased during that period? I think we’ll be off a few points in sales.”

While Amazon does a brisk toy business, “the internet doesn’t seem to be as conducive to the kind of impulse buying that is important to toy shopping.”