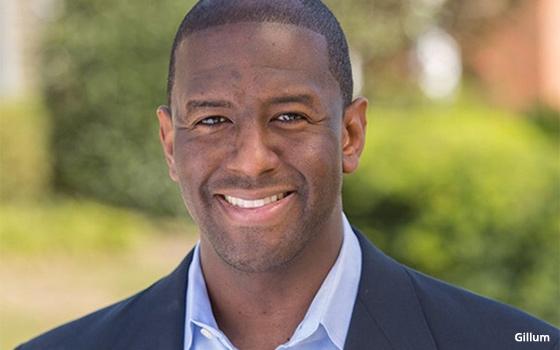 According to Florida Politics, Gillum said in a recent podcast that Israel had committed murder.

The Palestinians threw rocks and Molotov cocktails, the RGA email says. “According to a senior Hamas official, the overwhelming majority of Palestinians killed were members of the terrorist group Hamas,” it continues.

The email states that Gillum is “too radical for Florida.”

The message is part of a nasty campaign in which racist robo-calls have been made to voters with someone pretending to be Gillum.

The narrator speaks in “an exaggerated minstrel dialect,” with jungle noises in the background, NPR reports.

The calls were paid for by “The Road to Power, a neo-Nazi, anti-Semitic podcast operated by Scott Rhodes of Idaho,” NPR continues.

The RGA email also hit Gillum’s running made, businessman Chris King, an evangelical Christian who reportedly made an anti-Semitic comment when responding to a Harvard Crimson editorial:  “I was nailed to the cross. And most of the editorial staff that was so hard on me, the vast majority were Jewish.

King has since apologized for the comment, saying he was 20 years old when he made it, according to Florida Politics.

The RGA email concludes, “Gillum’s condemnation of Israel and King’s past comments prove their campaign is one of the most radical in the nation and raises serious questions about the direction of their campaign.”

Gillum , the 39 year-old African-American mayor, of Tallahassee, is running against Republican Ron DeSantis, a strong supporter of President Trump.

DeSantis has been criticized for saying, “the last thing we need to do is to money this up by trying to embrace a socialist agenda,” which some critics call “racist dog whistling,” according to NPR.

DeSantis has denied any such intent.