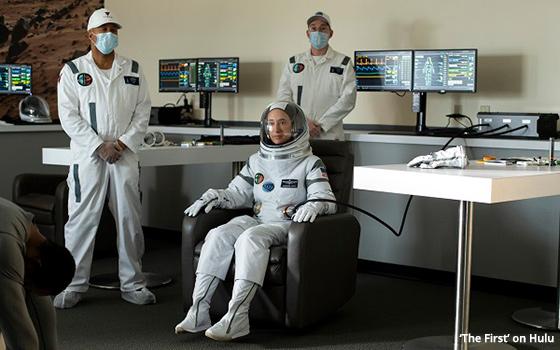 Many people seem captivated by the prospect of humans colonizing other planets, most notably Mars, which is the subject of yet another TV show starting Friday on Hulu.

The series is called “The First,” and it deals with the first manned mission to the red planet -- a fictional mission, to be sure.

Here in the real world, an actual voyage to Mars seems remote, and unlikely to occur for many years, if ever.

But in movies and TV shows, it's a done deal. The technology has been thought out and built, the mission scenarios mapped down to the smallest detail, the personnel exhaustively trained, and perhaps most crucially, the necessary billions of dollars in funding has been secured -- a combination of government and private sector investment.

What could possibly go wrong?

The primary draw of “The First” would seem to be Sean Penn, who stars in his first TV series here. His character is a grizzled space program veteran, a former astronaut who trained this young crew who are preparing to be launched to Mars as the first episode begins.

Penn, 58, is certainly one of our finest film actors and he is no less charismatic in this series as he broods and projects his inner pain in a voice made gravelly by cigarettes (presumably).

Judging from the first episode and part of the second (previewed by the TV Blog), the series intends to delve deeply into the Penn character, and probably others as well.

These include Natascha McElhone as the hard-driving director of this Mars mission, who has apparently clashed with the Penn character.

It is all very serious and punctuated with grave orchestral music heavy on bass tones like a Ron Howard movie. As a matter of fact, Howard was involved -- as executive producer – in the creation of another TV series called “Mars,” a hybrid documentary and fictional scripted show that premiered on National Geographic in 2016 that envisioned a Mars expedition in 2033.

Then as now, all of the somber music in the world could not persuade me that a trip to Mars is vital for humankind to undertake. Many people likely feel differently, and perhaps they get excited by the prospect of far-flung, expensive space travel.

Personally, I have long looked at these missions -- whether real or imagined -- and asked: “What's the point?”

On the other hand, promoting the idea of sending men and women to Mars is not really the point of this Hulu series, which is less a science fiction yarn than an exploration of how human beings interact with -- and try to control -- technology.

“The First” seems to take place here in the present day, as opposed to 2033 like the Ron Howard “Mars” series.

In “The First,” Penn's character and others are seen living with technology in the same casual way many people are doing so today -- controlling their TV sets and other appliances with their voices, and employing a microwave oven as the only device they would ever consider using for cooking food.

Viewers intent on sampling “The First” should not expect to see some sort of high-flying space romp. In fact, for a show about space exploration, “The First” is decidedly earthbound.

“The First” starts streaming on Hulu on Friday (September 14).