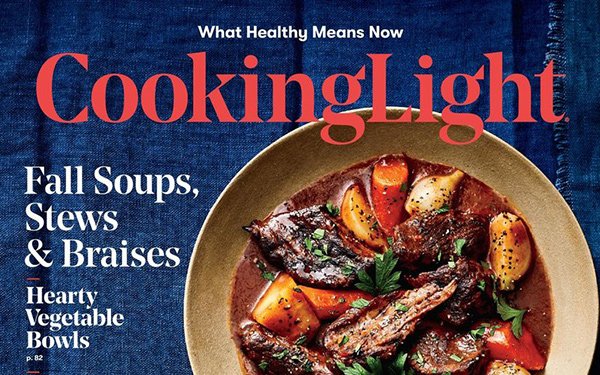 Meredith is merging its Cooking Light brand into EatingWell.

Cooking Light will remain as a website and publish six newsstand-only print editions a year. (The New York Post reports the company's Coastal Living will be reduced to a special-interest newsstand quarterly.)

Also, about 200 jobs at Meredith are being cut across the country, according to multiple reports.

Sid Evans, group editor of Coastal Living and Southern Living, will now focus solely on the latter. Hunter Lewis, editor-in-chief at Cooking Light and Food & Wine, will now dedicate to the latter publication.

EatingWell will now have a circulation of more than 1.77 million, and publish 10 times a year.

The move “will strengthen our editorial product, while providing advertisers with access to this passionate group of consumers seeking a healthier lifestyle,” stated Carey Witmer, executive vice president-group publisher of the Meredith Food Group.

According to the New York Post, about 25 editors are being let go from the Birmingham offices. The cuts affect production, information technology, finance, consumer revenue, digital, editorial and advertising departments.

“The cost savings associated with these opportunities will help fund growth-focused investments within or brand, digital, data and consumer revenue businesses,” the company told NYP.

Meredith also publishes food-focused titles like Allrecipes and Food & Wine. It acquired publisher Time Inc. and its 22 food and lifestyle magazines in January. These moves are likely an effort by Meredith to slim down its operations and eliminate duplication.

Some other businesses and operations at Meredith, such as the former Time Inc. book division, will now be outsourced.

Cooking Light’s December issue will be its last subscription-based issue.