Emmy Awards Were A Drag, But They Get A+ For Diversity 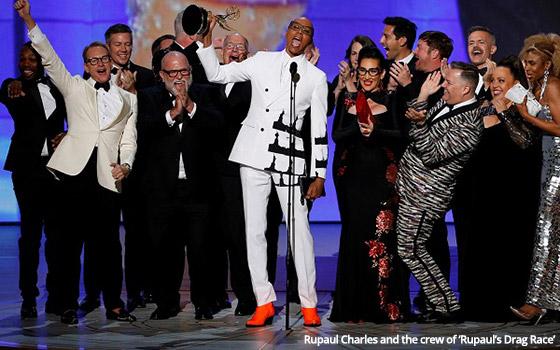 Diversity took center stage Monday night as Emmy awards were bestowed on a wide variety of performers and programs of every stripe -- from RuPaul to “Mrs. Maisel.”

At the same time, much of the three-hour show amounted to the dullest Emmy Awards telecast seen in quite some time.

Nevertheless, the awards given to a reality-competition show celebrating the skills and talents of drag entertainers and a comedy series about the life of a Jewish-American housewife living in New York City in 1958 demonstrated that diversity is alive and well, and thriving, in the television business.

Other Emmys were won by Peter Dinklage for “Game of Thrones,” Regina King, an African-American, for the Netflix limited series “Seven Seconds,” and Henry Winkler, 72, a senior and a Jewish American.

In one of the night's most triumphant moments, Winkler won for Best Supporting Actor in a Comedy for HBO's “Barry” -- the first Emmy win ever for the man best known as Fonzie on “Happy Days.”

The dominance of streaming-service originals such as “Mrs. Maisel” and Netflix's limited series “Godless” (for which Jeff Daniels and Merritt Wever won acting Emmys) were a reminder that when it comes to high-profile awards, the traditional broadcast networks lag far behind their subscription-based competitors.

At the same time, these old networks are the ones that air these very award shows -- giving priceless publicity to the streaming services and their content that are drawing audiences away from traditional TV. TV sure is a funny business sometimes, isn't it?

One place where it was barely funny at all, however, was Monday night's Emmy show on NBC. At about 9 p.m., when this three-hour bore-a-thon was only a third over, I wrote in my notes that this telecast was “possibly the worst Emmys ever.”

It improved ever so slightly over its remaining two hours, but it remained a pretty tough slog. Of course, that’s nothing new for awards shows, but this one seemed particularly interminable, perhaps owing to the unfortunate influence of “Saturday Night Live.”

The night's two forgettable co-hosts were the co-anchors of “Weekend Update” on “SNL” -- Colin Jost and Michael Che.

On the morning after on Tuesday, I could not remember a blessed thing they said or did, except for one: Their unfortunate, ill-advised role in having to introduce the recurring appearances of Maya Rudolph and Fred Armisen.

These two “SNL” alumni were evidently supposed to riff comedically on the awards, but instead they came across like ill-prepared amateurs at their first improv class. It was difficult to remember the last time anyone bombed this badly on an Emmy telecast.

Another “SNL” alumnus, Will Ferrell, ran a close second in the competition for which “SNL” personality bombed the worst. He came onstage to present the award for Best Comedy and wasted valuable airtime pretending to be exhausted from the walk to the podium.

The much-ballyhooed appearance of 96-year-old Betty White emerged, unfortunately, as one of the evening's most awkward segments. God bless Betty, but she seemed lost when standing at the podium as she fumbled and stammered through her lines, many of which were unintelligible.

Viewers watching at home winced and worried that she wouldn't make it through. It was also reasonable to wonder who on Earth was responsible for placing this revered star in this uncomfortable position.

Amid all the misfires and miscues, the sudden marriage proposal offered by Glenn Weiss when he accepted an Emmy for directing this year's Oscars on ABC came as a breath of fresh air. His girlfriend, Jan Svendsen, accepted.