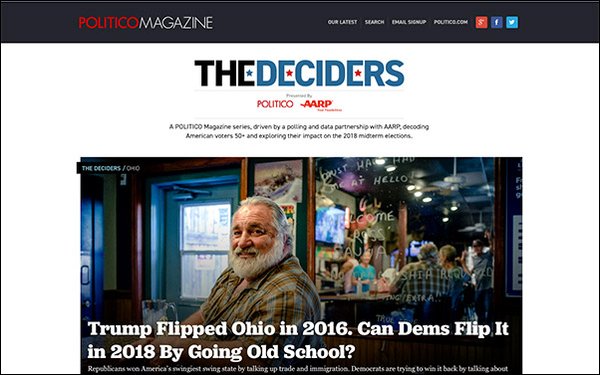 Politico and AARP, the organization that represents Americans 50+, joined forces to produce Politico's “The Deciders” series, which debuted in June. The series explores this critical voting block and how they impact the political terrain.

Pundits often discuss the importance of millennial voters in upcoming elections, but Nancy LeaMond, AARP’s executive vice president-Chief Advocacy Officer, says: “The role of 50+ voters in deciding elections should not be understated – especially with critical issues on the line this year.”

The "Deciders" current iteration, utilizing the polling and data partnership, looks at key states in the upcoming midterms. Candid interviews and photo essays reveal the frustrations and hopes of voters in Ohio, Arizona and Florida, three battleground states.

The new issue takes readers to various towns in Northeast Ohio, where economic anxiety around free trade, manufacturing and immigration impact the retired voters, who fear losing their pensions.

Trump won blue-collar Ohio by eight points in 2016, promising to revive the state’s shuttered mines and mills. But a new Politico-AARP poll suggests that today, only 43% of Ohioans approve of Trump’s performance as president. About the same percentage of respondents approve of his trade wars.

Many Ohioans of both parties agree with Jeff Wharton, who says Democratic Sen. Sherrod Brown “works his tail off for us.” Wharton, a 73-year-old former Marine who spent three years in Vietnam and then 48 years in the coal mines.

“Is the fiery left-wing populism of Democrats like Sherrod Brown and Richard Cordray (running for governor) the answer to the fiery right-wing populism that won Donald Trump the White House? In a state buffeted by economic change and globalization, it’s a fascinating time to be talking to voters about trade and America’s shifting role in the world,” stated Blake Hounshell, editor in chief, Politico.

“The Deciders” also examines the changing face of Florida. The story “Generation Pickleball: Welcome to Florida’s Political Tomorrowland” looks at upscale retirement communities near Orlando as a bulwark against a blue wave.

Given the reliability of baby boomers and older voters, Politico and AARP are demonstrating to candidates, political influencers and the media why attention must be paid.