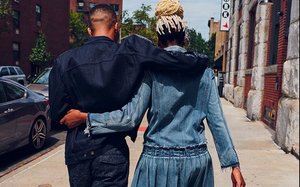 The athleisure look continues its reign among American women, but a new report from the NPD Group reports that thanks to injections of yoga-inspired stretch materials, denim is making a comeback, with a sales surge of 9%.

That news comes as Lululemon, the leading athleisure brand, continues to cruise to new heights, and Levi’s shakes up its management team.

The Port Washington, N.Y.-based market research company says that in the 12 months ended in July, the total U.S. jeans market reached $16.4 billion, a gain of 5% from the prior year, driven by both classic and new styles.

Skinny jeans are still No. 1, rising 6%, and account for 40% of women’s jean sales, thanks to new materials.

NPD reports that only one in six pairs are purchased online, a trend brands are eager to change.

And it is promoting Liz O’Neill from chief supply chain officer to executive vice president and president, product, innovation and supply chain
Meanwhile, Lululemon continues to flex its athleisure muscle, with its stock price reaching record levels, based on rising sales and new appointments.

The company recently announced that its sales for the second quarter jumped to $723.5 million, up 25% from the same period a year, with comparable sales rising 20% and same-store sales climbing 10%. Direct-to-consumer revenue surged 48%. (And when it excludes the results of an online warehouse sale in the prior year period, those direct-to-consumer sales zoomed 66%.)