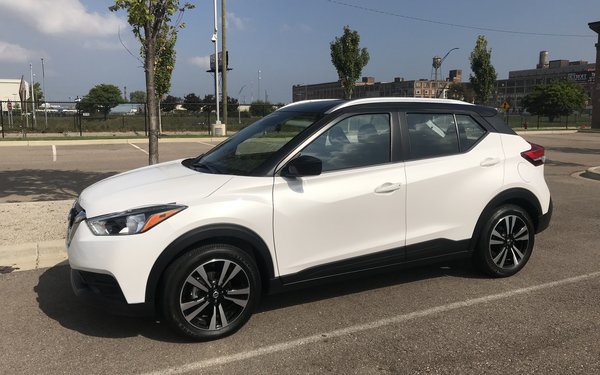 There are theories that younger drivers have little ambition to own a vehicle, in large part because the vast majority of cars and trucks on the road are too expensive.

That's changing with vehicles like the Nissan Kick. It’s a sporty compact utility vehicle that has a base price of $17,990 but feels like a much more expensive vehicle.

For starters, there’s the NissanConnect integrated audio and navigation system with Apple CarPlay and Android Auto. The model I tested, the 2018 Kick SV, didn’t have the most premium sound system the automaker offers in the vehicle, but it still rocks. There’s an optional Bose audio system with speakers discreetly mounted in the driver’s seat headrest to deliver excellent sound without high volume. Even without it, the base model puts out great high-quality sound.

The smallness of the vehicle makes it nimble on the road and during parking, but the interior still feels spacious, so drivers get the best of both worlds. There’s no turbo, but the 125-horsepower engine is adequate for merging and passing.

The Kicks’ competitors include the Kia Soul, Hyundai Kona and Ford Ecosport.  Nissan considers the Kicks to be its “expressive” CUV. It positions it as entry-level with an affordable price, but with eye-catching style and technology. The vehicle offers front-wheel drive, and “surprising space and efficiency,” according to the automaker.

Its target buyer is ages 25-35, young-minded singles and couples with no children and a household income of $45,000 to $65,000. They are “smart spenders," tech-dependent, image-conscious and socially responsible. From an entertainment/lifestyle perspective, they are 61% more likely to search for restaurant reviews, 61% more likely to scout out daily city deals and 83% more likely to enjoy backpacking and hiking.

The Rogue Sport, on the other hand, is considered the singles/couples CUV that targets consumers with more of an emotional appeal, according to the company. It differentiates itself with all-wheel drive and a strong feature content. It’s also more expensive than the Kicks.

In marketing the Kicks, Nissan was the first to sign a main-stage collaboration and immersive 360 Kicksperience Dome activation at the Billboard Hot 100 Music Festival. The partnership extended across digital and social platforms. A partnership with Spotify featured a hyper-focused personal playlist, artist-recorded video series and heavy rotational media support. The launch media plan also included the World Cup and the BET Award Show.

Back to the test drive.

The comfort and spaciousness of the exterior is surprising compared to my previous experience with other small CUVs. For starters, even though it is an affordable vehicle, it features NASA-inspired Zero Gravity Seats, which are comfortable even for a long three-hour drive. It offers 43.7 inches of front legroom and 40.7 inches of front headroom — both best-in-class for its segment.

You really don’t realize you are in a small CUV until you have to park in a tight parking lot. The vehicle is very nimble and gets in and out of small spaces with ease. Getting back into my mid-size SUV after having driven the Kicks was actually a bit of a letdown. I’ve already noticed parking is definitely more of a challenge.

The cargo area, which includes a thoughtful cover so passerby can’t spy what’s in your rear storage, features a hatch that opens high enough for a 6-foot-tall person to not have to duck under it. There is 25.3 cubic feet for gear, which is better than the Kia Soul, Hyundai Kona, Ford EcoSport and Toyota C-HR. One negative is the rear seats don’t fold completely flat.

From a safety standpoint, there’s a lot to like. It’s the only vehicle in its segment to offer standard automatic emergency braking. Available advanced driving assist features include blind spot warning, rear cross-traffic alert and an intelligent around-view monitor. The 7-inch touchscreen display is standard, as is Bluetooth streaming audio.

Consumers who care about a vehicle’s price are likely to also take mileage into consideration. The Kicks features 33 MPG combined (36 highway and 31 city). Fuel economy is best in segment among non-hybrids, according to the automaker.

The styling on the vehicle is eye-catching but not over-the-top. A two-toned roof is another element that gives it a more upscale feel. Despite its target buyers, this stylish CUV is likely attract buyers who could afford a more expensive vehicle.