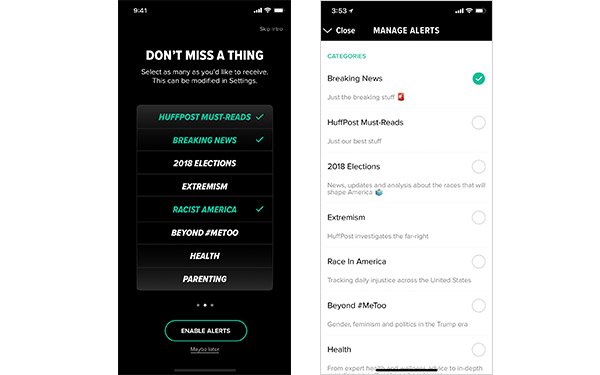 HuffPost is updating the push notifications feature for its app, giving users the option to get alerts from up to nine new editorial categories.

Rather than create push notification categories around more traditional verticals — like politics and lifestyle — HuffPost examined what content its audiences engaged with the most on the app (as well as across platforms), and which sections users were reading multiple pieces in their visit.

The site was looking for areas in which its users were “heavily engaged and very interested in this topic,” senior product manager Greg Emerson told Publishers Daily.

Emerson, who joined HuffPost this January from The Wall Street Journal, where he was most recently mobile product manager, said he wanted to give users “more options to make push a central part of the usage of the app.”

“Our audience did seem hungry for push notifications around certain interest categories that did not fit into breaking news,” he said.

The goal behind the updates, Emerson said, is not necessarily increased page views, but increased “engagement, retention and loyalty strategy.” As HuffPost’s audience grows, Emerson wanted to “build our app audience and get people to use it more often.”

After testing the new push notification categories on users, HuffPost found the average open rate for the app was “around 50% to 70% higher than the breaking news push open rate,” Emerson said.

That’s “significantly higher than the industry averages, in my career,” he added.

Other publishers like The New York Times and The Wall Street Journal have category-based push notifications, but Emerson said it is not a standard option in news apps yet.

The updated feature was released in the new version of the HuffPost iOS app last week.

New users of the HuffPost app will have a “new on-boarding flow” that will present the nine categories to users for them to select the ones they want to receive.

Existing app users will have an “alerts management screen” where they can choose the categories that interest them.

In three to six months, HuffPost will see if its audience is engaging with any new categories and may add them to its list of push notification options.

Another feature the team is looking at: sign-up modules on articles.

If a user is reading a parenting article, for example, there could be a place on the page where the user can sign up for alerts in the parenting category, Emerson said.

Push notifications for live events is another feature HuffPost is researching, which would allow readers to follow an event happening live without having to unlock their phone.

In the future, Emerson and the HuffPost team wants “one-to-one individual push notifications to devices based on [users’] reading history.”

Going further than editorially curated alert categories, this feature would use machine learning to provide content recommendations through push notifications to app users based on each users’ reading behavior.