Did You Hear The One About The POTUS Who Walked Into His Own Joke? 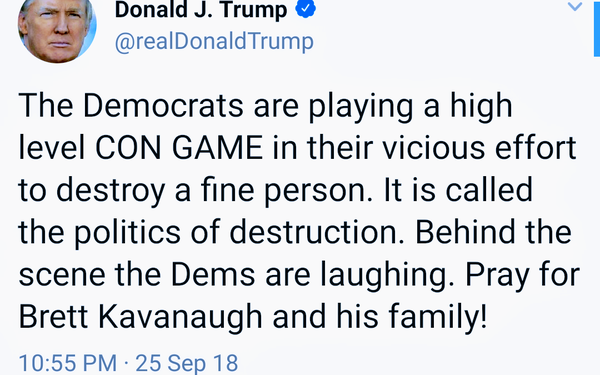 It may not be possible to calculate how many times the current President has referred to America or one of its Presidents as the “laughing stock” of the world, but he made it come true Tuesday to a global audience on TV, the internet and countless social media feeds carrying his address to the United Nations' General Assembly.

Clearly, laughter was on his mind, because last night he tweeted a reference that “the Dems are laughing” about their opposition to Supreme Court Justice nominee Brett Kavanaugh.

It’s an interesting tell, because he seems to overreact to others laughing at him and tries to turn it around. Some say it was the laughter that President Barack Obama and comedian Seth Meyers sparked while satirizing him at the White House Correspondents Dinner that provoked him to run for office in the first place.

And now it has come true.

politics, social media, tv, twitter
2 comments about "Did You Hear The One About The POTUS Who Walked Into His Own Joke?".
Check to receive email when comments are posted.
Read more comments >
Next story loading