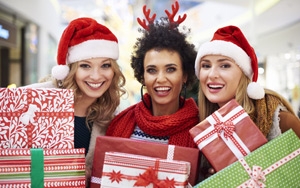 Confident consumers are likely to make the coming holidays cheerier, with the National Retail Federation forecasting retail sales gains of between 4.2% and 4.8%.

That translates to as much as $720.89 billion in November and December -- and while that is somewhat below last year’s 5.3% gain, it still stands well above the five-year average of 3.9%.

“With this year’s forecast, we continue to see strong momentum from consumers as they do the heavy lifting in supporting our economy. The combination of increased job creation, improved wages, tamed inflation and an increase in net worth all provide the capacity and the confidence to spend.”
The NRF, which is part of a multi-industry coaltion called Americans for Free Trade, says the escalating trade war could eventually hurt consumer spending, but it's still optimistic consumer spending will remain healthy through the end of the year.

The predictions include all retail sales in November and December, excluding automobiles, gasoline and restaurants. And it includes online and other non-store sales.

Because the fourth quarter is so critical to retailers, holiday forecasts are one of the industry’s most closely watched metrics.

Last month, Deloitte forecast an even bigger jump of between 5% and 5.6%. The International Council of Shopping Centers is expected to release its numbers this week, as is Forrester, which tracks e-commerce holiday spending.