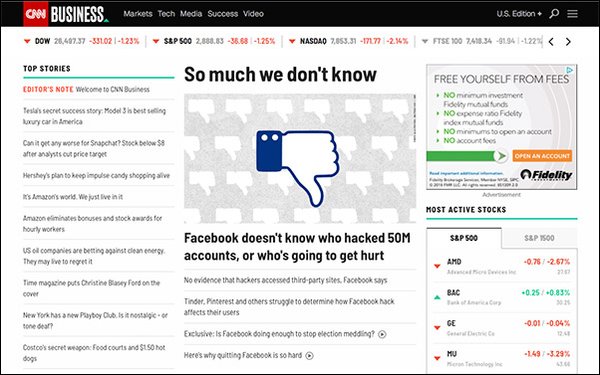 The CNN Business site has a new look today, coinciding with a fresh editorial focus: “to chronicle the digital transformation of business, and how it is disrupting every corner of the global economy.”

“To understand business in 2018, we have to recognize that every company is now a technology company,” stated Jason Farkas, vice president and general manager, CNN Business.

Sub brands like CNN Money, CNN Tech and CNN Media no longer have their own hubs on the CNN site. They are now integrated into CNN Business, which has four verticals: Markets, Tech, Media, Success, Video.

“Success” — a new vertical on the site — will explore career growth, entrepreneurship and leadership.

“Perspectives” is a new column that features some of the biggest names in tech, finance and global business. Melinda Gates, Uber CEO Dara Khosrowshahi and Morgan Stanley CEO James Gorman are some of the contributors to the column.

The launch of CNN Business is sponsored by Fidelity.

Forbes, Politico and The Atlantic have recently opened or expanded offices in San Francisco to cover Silicon Valley, and tech as well.

New franchises on CNN Businesswill explore the way innovation is impacting the economy, according to the company.

“Center Piece” is a new weekly feature ranging from profiles of emerging business leaders to investigative pieces on companies around the world.   The “Leading Indicator” series will use video, infographics and articles to provide context to investors on the market’s trends.

CNN Business editors will identify “Risk Takers” in an annual list of influencers making “the boldest bets” in business.

The “United States of Amazon” is a new, multi-part reporting initiative on Amazon. It includes 10 pieces over a week on how Amazon is changing American lives and the economy.

And "Centerpiece" will be an in-depth look at the strategies and ethics of tech companies, personalities and CEOs.

CNN Business will continue to produce live-stream programming, such as the recently premiered "Markets Now,” CNN’s weekly live show from the floor of the New York Stock Exchange every Wednesday.