Acura's Influencers Encourage Others To #LookUp 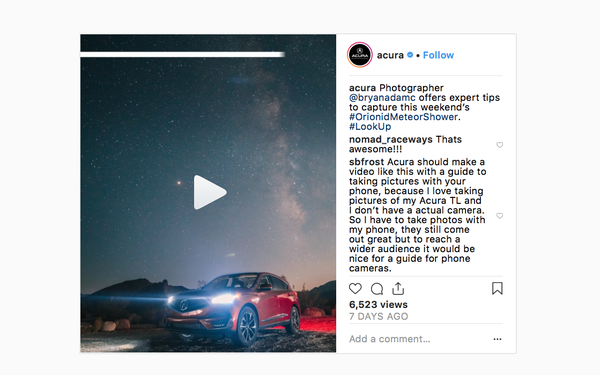 Some of the photographer influencers who are part of the #LookUp campaign (Ryan Miller, Rachel Jones Ross and Bryan Castillo) recently took  their RDXs on road trips to three of the darkest places in America (Baxter State Park in Maine, George Washington and Jefferson National Forests Virginia, and Death Valley) to shoot the Orionoid meteor shower that occurred Oct. 21.

The campaign, from Acura's agency of record MullenLowe, is inspired by the organic use of #LookUp, which asks users to look up from their phones and daily lives and share views and experiences.

For its #LookUp campaign, Acura recruited content creators to showcase the RDX in unexpected, visually dynamic ways, including photography captured in a wide range of environments: from the forest to the city, from daybreak to a starry night, from the mountains to the desert.

The influencers have created "How-To" guides and step-by-step tutorials meant to inspire their individual fans and followers to explore the world through the lens of #LookUp. Each guide is driven by an influencer's specific area of expertise, such as how to photograph the Milky Way or urban environments or compose the perfect shot.

The effort is part of the "Everything We Ever Imagined and Then Some" RDX marketing campaign that debuted in June.