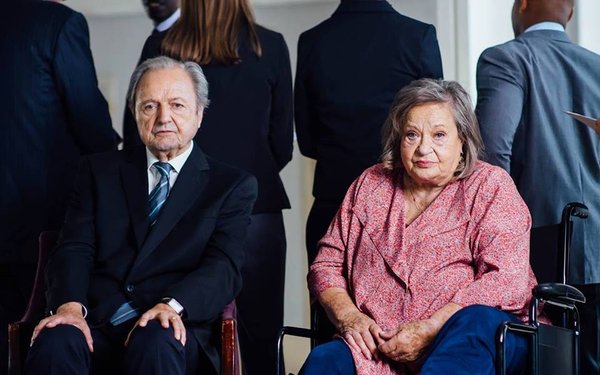 You hardly ever see positive images of the elderly on your TV or streaming device, so I was eager to check out two titles that seemed to offer just that.

“Together,” a British film that will hopefully be available soon over transactional streaming services like iTunes and Amazon, was touted as a romantic drama concerning a man kept in an elder-care home against his wishes — and thus separated from his wife of 60 years.

“Liverspots and Astronots,” an animated comedy series that premiered last week on Facebook Watch, promised a “nursing home in space, filled with funky old folks who discover they play an integral role in the survival of the universe.”

Aside from these characters’ wrinkles, though, little in the first three episodes of "Liverspots and Astronots" dwells on their age. They also don’t seem to be in a nursing home at all. Where are all the doctors and nurses hiding? The setting seems more like an eldercare home.

And as in the earthbound home in “Together,” the seniors seem to be treated well — to outside observers at least. Of course, they need to battle aliens once an episode or so.

But that’s nothing compared with the enemy that Philip (Peter Bowles) faces in “Together”: government bureaucracy.

While both productions treat elders with respect, most of the younger people in “Together” don’t. Although ostensibly in jobs designed to help the aging, they are caught in red tape and career paths that lead them to do just the opposite.

No such mistreatment of the elderly occurs in “Liverspots and Astronots.” We don’t recall even seeing any young people in the show, although it’s sometimes hard to know when you’re dealing with animated aliens and animals.

Another three episodes will debut this Thursday and every Thursday through November 29 on Facebook Watch, at which point there will be 21 total episodes, each some eight minutes long. So you’ll be able to binge them all in about two-and-a-half hours.

“Together,” meanwhile, gets all its points across in under 90 minutes.

You could dwell on the film’s condemnation of society’s supposed support system for the aged — that instead leads to physical, psychological and financial harm.

Or you can revel in the film’s romantic tale – with Bowles and Sylvia Syms turning in splendid performances as the octogenarian soulmates.

There are some fine supporting performances too. I especially enjoyed Emma Richardson providing comic relief as a home health aide too busy with her own affairs -- and adherence to nonsensical rules -- to actually aid anyone.

You can view "Together's" trailer and check in occasionally with a streaming search service like Justwatch or Reelgood to see when it becomes available for rental or purchase.