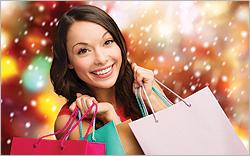 Two new surveys predict strong consumer spending for the holidays ahead, but include plenty of signals that brick-and-mortar stores will struggle in the weeks ahead.

Deloitte, which estimates that total holiday spending will reach an average of $1,536 per household, says respondents plan to spend 57% of their budget online, and just 36% in stores, a drop of 10 percentage points from last year. (Earlier this month, Forrester estimated a bump of 14% in online spending to $151 billion this year, but an overall advance of just 1.7%.)

And the National Retail Federation says it expects consumers to spend about $1,007 during the holiday season, which represents an increase of 4.1% from the $967 they said they would spend last year.

The Deloitte research, based on online polling of 4,000 respondents, finds that $611 of the family budget isn’t for gifts, but for holiday entertaining and socializing outside the home. The researcher says $525 will be spent on an average of 16 presents and gift cards. That’s a 20% jump from last year’s $430 in 2017. Self-gifting also continues its hot streak, with 51% planning to buy something for themselves, a spike of 15 percentage points in five years.

The study also finds increasing evidence that people care less than they used to about retailers’ day-specific marketing strategies, with just 44% saying they intend to shop on Black Friday, down from 47% last year, and 53% planning to shop on Cyber Monday, down from 57% in 2017. Online retailers like Amazon, and mass merchandisers, including Target and Walmart, continue as the most popular places for people to shop.

Meanwhile, the Washington, D.C.-based NRF, which recently predicted that retail sales in November and December will gain between 4.3% and 4.8%, to $717.45 billion and $720.89 billion respectively, provided a different picture of the upcoming holidays.

Besides predicting $500 less in per-household spending, it finds more–$638–will be spent on gifts, $215 on non-gift purchases like food, decorations, flowers and greeting cards, with the balance ($155) going to other non-gift purchases.

It reports that 55% say they’ll shop online, 55% in department stores, 51% at discount stores, 44% at grocery stores, 33% at specialty clothing stores and 24% at electronics retailers. Half of those who say they will shop online intend to pick up their purchases at a store.

For online shoppers, free shipping is most important, with 94% planning to use it, 16% saying they’ll use expedited shipping and 11% planning on same-day delivery.

The NRF survey included more than 7,300 adults and was conducted by Prosper Insights & Analytics.