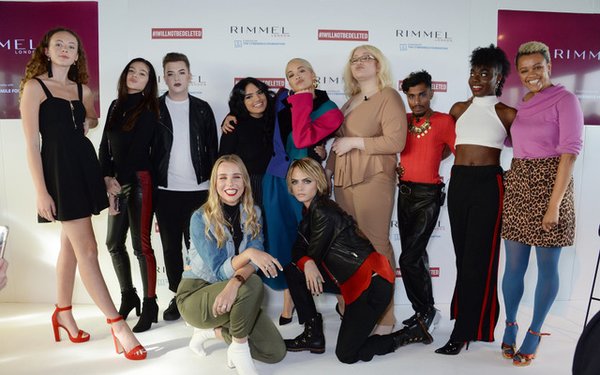 Any selfie poster knows that beauty bullying online is epidemic, but it’s far worse for young women. So Coty’s Rimmel London cosmetic brand and anti-cyberbullying nonprofit Cybersmile Foundation are teaming up to introduce the Cybersmile Assistant, an AI-driven tool they hope can help, along with an initiative called #IWillNotBeDeleted,

The Rimmel/Cybersmile partnership is set to last three years. It puts singer Rita Ora and supermodel Cara Delevingne, both Rimmel spokespeople, front and center, but also leverages a broader network of influencers.

The idea stems from Rimmel research that one in four young women have experienced beauty cyberbullying and that those negative or abusive comments result in the deletion of 115 million social media images each year.

The Cybersmile Assistant, scheduled to roll out next year, beginning with an English language version, will be available to anyone visiting the Cybersmile website, steering users to local resources, helplines and organizations that help with cyberbullying.

Functioning as a live-chat feature, it will be able to make recommendations to support each person, with appropriate localized responses, whether they’re based in rural New Zealand, suburban Scotland or Palo Alto, Calif., where the Cybersmile Foundation is based.

Rimmel’s research uncovers some alarming findings about the effects of cyberbullying on young women. The company surveyed 11,000 women in 10 countries, all between the ages of 16 and 25, and found a majority silent on the problem, with 57% saying they didn’t tell anyone.

Some 67% say bullying zapped their confidence, and 46% say they went on to harm themselves somehow, including with alcohol and drug abuse and eating disorders.

“Rimmel is about championing self-expression in beauty,” says Sara Wolverson, vice president of Rimmel global marketing, in its announcement. “We have always been against narrow definitions of beauty and people being judged because of the way they look. Coty wants to positively impact prejudice and discrimination that stand in the way of self-expression.”

Cybersmile also works with such brands as Claire’s Stores, a retailer specializing in teen accessories, and Brita water filters, including an anti-hate campaign called “The Filtered Life” with the NBA’s Steph Curry.

Earlier this year, Coty launched the “We Stand For You” partnership with Global Citizen, aimed at tackling prejudice and discrimination, especially based on ethnicity, gender, sexual orientation and gender identity.