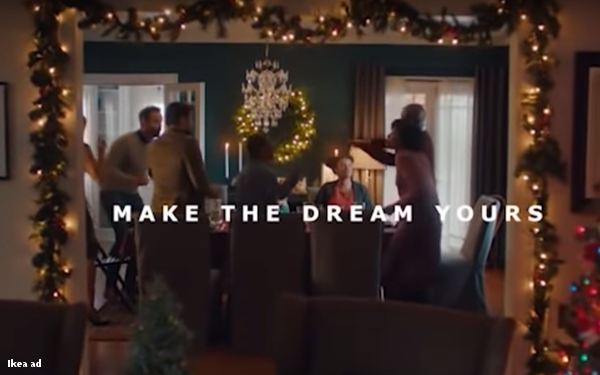 Retailers are gearing up for the holiday season — which officially kicks off Nov. 1 — with strategies that range from sentimental and whimsical to cause-related.

Ikea has just introduced a holiday ad that celebrates diversity, pointing out the many ways people celebrate, from struggling to pronounce “L’Chaim” to slurping noodles with chopsticks. “Our holidays don’t look the same,” the Ogilvy-created spot says. “And maybe that’s what makes us great.”

An Ikea spokesperson tells Marketing Daily the company hopes to convey human connection, not perfect home décor, with this ad.

“It is about focusing on what we know is most important to people in their homes, and that’s enjoying and celebrating together with family and friends. We know people celebrate in many different ways,” she says, and the furniture retailer wants to help “create that warm and welcoming home so that you can celebrate in the way that means the most to you.”

The ad is running on national cable and in regional TV markets, in 30 and 15-second versions, with six-second cut-downs running on digital platforms.

Nordstrom has also unwrapped its holiday campaign, themed “Let’s go gifting.” Directed and photographed by Theo Wenner, who has worked on campaigns for Chanel, Chloe and Topshop, the video is scheduled to run on its website and social and digital platforms, as well as print and out of home, with a national spot scheduled to break Nov. 5.

The Seattle-based retailer is donating 1% of all gift card sales to nonprofits, and so far this year has already given $7.5 million to 600 organizations, including Children’s Miracle Network Hospitals. This year, it’s also selling $10 giving cards, which keep donations localized to 55 network hospitals.

It’s also launching a new collection of cashmere, called Nordstrom Signature, in partnership with BSR’s HERproject, which implements workplace training programs on health, finance and gender equality in factories around the world. And 2.5% of all sales from its Treasure & Bond private label are going to WE, an organization that works with youth to end poverty.

New this year are Gift Hubs, with a selection of possible gifts organized by customer personalities,  in select stores. And customers can make appointments with Nordstrom’s gift scouts, who can make finding the right gift easier.

Both Ikea and Nordstrom’s have good reason to be optimistic this year. For the first time since 2015, Moody’s has upped its outlook on the retail sector to positive, saying chains have finally begun to “reap the benefits of investments aimed at cost efficiencies, enhancing their e-commerce capabilities, as well as customers' in-store experience. This coupled with a strong economy will result in higher profits.”