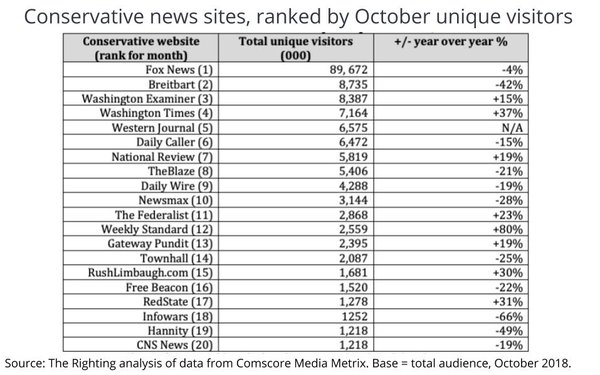 The midterms may have resulted in a blue wave, but the run-up in October showed some ebb and flow among the most prominent “red” news sites, according to an exclusive analysis by political spectrum news site tracker TheRighting.

All four rank in TheRighting’s top 20 conservative websites of the month.

Infowars' precipitous decline is noteworthy, because the site previously benefitted from a surge in traffic when it was banned from several social media platforms earlier this year.

Not all right-wing sites ebbed in October. Among those that flowed: The Weekly Standard generated an 80% increase in year-over-year unique visitors, followed by The Washington Times, (+37%), RedState (+31%), RushLimbaugh.com (+30%), and The Federalist (23%).