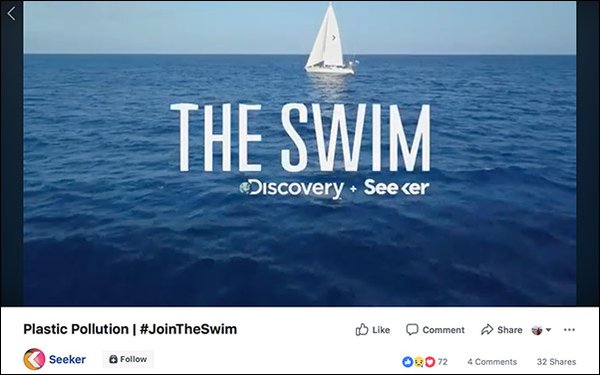 Group Nine Media has brought together its four brands to participate in a social campaign that educates audiences on the impact of ocean pollution.

The campaign, called #JoinTheSwim, has the potential to reach Group Nine's collective 45 million daily viewers, according to the company.

It builds on Ben Lecomte’s mission to be the first person to swim across the Pacific to bring attention to the health of the ocean and plastic pollution.

Lecomte’s mission has been documented in an editorial series called “The Swim,” hosted by Group Nine’s science brand Seeker. The series is created in partnership with Discovery Channel and 27 science institutions, including NASA and Woods Hole Oceanographic Institution.

Seeker has already created over 100 editorial pieces for “The Swim.”

This is the first social good campaign supported across Group Nine’s media brands.

Lecomte and the crew on the small boat have been shocked to find plastic every day of the journey — not just as they approached the Great Pacific Garbage Patch, a massive collection of debris floating in the ocean, Group Nine's Chief Brand Officer Suzanne Kolb told Publishers Daily.

Lecomte and his crew collected over 1,000 samples on the journey to learn more about plastic pollution, mammal migrations and extreme endurance. Unfortunately, the journey has been cut short, derailed by irreparable damage to the boat’s main sail from storms in the Pacific.

There are 25 different studies happening on the boat, including collecting samples of microplastics and water. Studies on Lecomte are measuring the impact of weightlessness on the body from long durations of swimming — and what it may do to the human body in space.

Lecomte’s swim may have ended, but the project signals “the beginning of something and not the end,” Kolb said.

Group Nine Media is “committing to this lens: to find something where we can move the conversation forward,” she said.

Each brand will create content around “The Swim” tailored to their specific audience's interests. They will monitor watch time, engagement and views from the #JoinTheSwim campaig, to see if "we get the message out,” Kolb said.

While the four different brands — which range from covering news to animals —- may seem very different, “ocean health and planetary health impacts the audiences” of Seeker, Thrillist, NowThis and The Dodo in different ways, she added.

On Monday, Seeker launched its weeklong #JoinTheSwim campaign to encourage viewers to reduce plastic waste. Topics for the campaign across the four brands include debunking the myth that the Great Pacific Garbage Patch is an isolated area; explaining how microfibers are released from clothes into the ocean and how plastic pollution is dissolving our seafloor.

The Dodo, for example, will focus on how certain animals, such as the albatross, are impacted by plastic pollution. NowThis will publish an exclusive interview with Lecomte.

“There’s no point in making a social impact campaign if you don’t think you can difference,” Kolb said. “A lot of things matter to our audiences. If there’s one thing we can do, we can make it clear this is something that we need to solve now, not 20 years from now.”