Forecast: Big Market For Smart Speakers, Other Predictions About 5G, And. . . Radio? 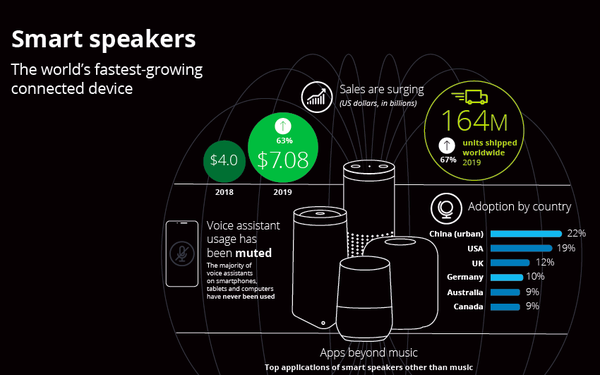 Deloitte’s annual forecast, out today, doesn’t reach many startling conclusions about the growth of artificial intelligence, smart speakers or 5G technology -- but it takes a relatively deeper view of all the newness around us than most year-end predictions do.

The company’s 18th edition of “Technology, Media & Telecommunications Predictions" spends time delving into the real technology star for 2019: 5G, which ultimately may change everything about how we traffic in information and images.

The report agrees with everybody else that 5G technology should take off in 2019, but notes some complications.

Something like 25 new operators will start offering 5G in 2019, and twice that many the year after that.

But the report also notes that real 5G phones are necessarily more expensive -- by about $40 -- than existing smartphones.  That may inhibit consumers, especially because the limited 5G buildout by 2019 will make the new phones more capable than the world around them actually can handle. Meanwhile, the report notes, cheaper latter-day 4G LTE phones with attractive 5G features may be marketed as 5G.

Other 5G details remain to be worked out. In fact, Deloitte predicts only one in five mobile connections will come via real 5G technology, reaching all the way to 2025. (That technology lag mimics the 3G to 4G consumer migration time.)

In the here and now, Deloitte predicts a rosy outlook for smart speakers. That industry segment will be worth $7 billion in 2019, selling 164 million units at an average price of $43 each.

This year, about 98 million smart speakers will be sold, so the jump in 2019 would be a substantial 63%. By the end of next year, there will be 250 million installed units out there, according to Deloitte. (By comparison, Nielsen counts 119.6 million TV households.)

And that data is just for the United States. Deloitte notes smart speakers were mostly an English-language trend until this year, but next year, sales should really skyrocket, because people in other countries, including China, are just as captivated by voice assistants. “Potential demand for smart speakers could be in the many billions of units, possibly even higher than for smartphones.”

This 96-page report is packed with information that bullet points don’t fully convey, marking China’s more firm ascension in the tech and semiconductor businesses; the growth of artificial intelligence everywhere; the much wider vista for 3D printers and quantum supercomputers; and the growth of esports and sports betting.

It even salutes old technology, noting the enduring popularity of radio that in 2019 will be one year shy of the 100th anniversary of its first broadcast.

About radio, Deloitte is self-consciously bullish on the medium and predicts that in the U.S. 90% of 18- to 34-year-olds will listen to radio at least weekly in 2019, for an average of more than 80 minutes a day. Indeed radio listening keeps steady as TV viewership by that same age group declines -- and by 2025, if the trend continues, they’ll spend more time listening than viewing.

They just might not know it. People meters are now very good at measuring passive listening, the report notes.

In August, Deloitte asked people of all ages if they ever listen to radio in any form (including online and satellite radio). When they compared answers to Nielsen data, the Deloitte surveyors discovered every age demo underreported by between 25-43 percentage points, with younger listeners underreporting the most.

About sports, Deloitte also had some surprising statistics. It says 40% of U.S. men who watch sports on TV will bet on the games, at least weekly, in 2019.

As for esports, Deloitte Global predicts  that in 2019, the new franchise leagues for Overwatch, NBA2K, and League of Legends will expand into major U.S. cities, following the model for professional sports. “Overall, analysts expect reported revenues from the global esports market to reach $1 billion in 2019, driven by advertising, broadcast rights, and league expansion.” That constitutes a 35% expansion in one year.