Anatomy Of CBS Moonves Statement: What Is 'Pervasive'? 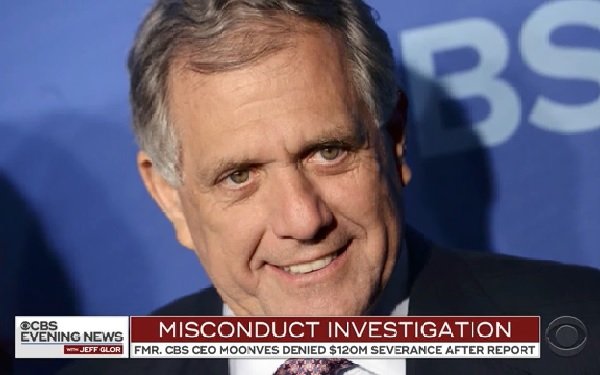 Whether or not sexual harassment was (or is) pervasive at CBS depends on how one defines “pervasive.”

This parsing of the word “pervasive” arises from the statement released Monday afternoon by CBS that sought to put a cap on the Les Moonves sexual harassment drama that has understandably dogged and preoccupied CBS Corp. for the better part of 2018.

The headline on the stories that appeared on Monday soon after this statement/news release turned up in journalists’ email inboxes emphasized the estimated $120 million in severance money that Moonves will not now receive following a months-long investigation by two outside law firms into his behavior.

The statement gave no details about the investigations’ findings. Instead, it provided the conclusions that stemmed from those findings.

“Statement from CBS Board of Directors” was the headline -- in bold and all-caps -- on the release.

The lede paragraph read: “The Board of Directors of CBS has completed its investigation of former Chairman and CEO Leslie Moonves, CBS News, and cultural issues at CBS.”

The next paragraph gave the reason for the decision to deny Moonves his severance money. “With regard to Mr. Moonves,” the paragraph said, “we have determined that there are grounds to terminate for cause, including his willful and material misfeasance, violation of Company policies and breach of his employment contract, as well as his willful failure to cooperate fully with the Company's investigation. Mr. Moonves will not receive any severance payment from the Company.”

The “grounds” for this decision were not provided. Nor was any dollar amount ever specified in this statement, although this $120 million amount was reported everywhere.

Whether this amount is the true amount or not, it does make for a dramatic headline when a man is denied a nine-figure payout because he bullied others into having sex with him (which he denies).

The third paragraph of the statement is where the word “pervasive” comes in. “As a result of their work,” the statement says, “the investigators also concluded that harassment and retaliation are not pervasive at CBS.”

Not pervasive? The sentence that follows can be taken by some to indicate these patterns of harassment and retaliation are pervasive. Here is the sentence: “However, the investigators learned of past incidents of improper and unprofessional conduct.” It is in that sentence where the question of pervasiveness arises.

How many past incidents were there? Two? A dozen? Fifty? A hundred? What makes these incidents “not pervasive”? Were there not that many? Were they restricted solely to only one or two departments or office suites -- meaning that throughout the corporate vastness of the rest of CBS, these kinds of incidents never occurred?

As worded in the statement, this conclusion that a culture of sexism and/or sex harassment is not pervasive at CBS comes across as wishy-washy. It reads like CBS is a corporation that is not owning up to a culture that has evolved, and exists, within its offices.

Instead, one gets the feeling that with this statement, CBS intends to deny and minimize this rather glaring defect in its corporate culture.

Just read the sentences that come after it. These sentences are all critical of the company's “human resources function” in dealing with allegations of sexual harassment. This too points to the very pervasiveness that the rest of the statement denies.

“[The investigators] concluded that the Company's historical policies, practices and structures have not reflected a high institutional priority on preventing harassment and retaliation,” the statement said.

“The investigation determined that the resources devoted to the Company’s Human Resources function, to training and development, and to diversity and inclusion initiatives have been inadequate, given the size and complexity of CBS’ businesses. Employees also cited past incidents in which HR and the Company did not hold high performers accountable for their conduct and protect employees from retaliation,” it said.

It is not unreasonable to ask this question after reading this: If such patterns of behavior are not pervasive in the company, then why should the human resources department give this issue a high institutional priority?

One might reasonably conclude that this behavior is pervasive. Why else then would the investigators recommend that human resources gin up its efforts to prevent it and deal with it?

The entire CBS statement runs just under 350 words (not counting the CBS Corp. boilerplate about the company that appears at the bottom of every news release CBS puts out). By comparison, this daily TV Blog is, on average, about 700 words (although this one is longer).

The statement ends with the Board-with-a-capital-B insisting that, suddenly, everything is fine now. “The Board,” says the statement, “which includes six new members, and the Company's new management have already begun to take robust steps to improve the working environment for all employees. Among other things, the Company appointed a new Chief People Officer, is actively engaged in ways to enhance and reimagine the Human Resources function, and has retained outside expert advisors to develop other initiatives for promoting a workplace culture of dignity, transparency, respect and inclusion. These efforts will continue to be a high priority for the Board and the Company’s management, and we will continue to work together to communicate with our workforce in that regard.”

The TV Blog sincerely wishes the new CBS Chief People Officer good luck with all that.