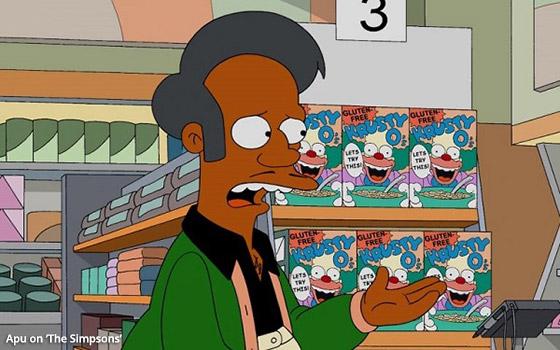 “The Simpsons” has long been critically acclaimed for the quality of its comedy, which happens to include stereotypes of various ethnic groups.

For the better part of the three decades in which this Fox show has been a staple of prime-time television, nobody batted an eyelash. Or if they did, no one seemed to notice or hear the complaints. Nor were they taken seriously.

This year, however, a crescendo of disapproval was heard (starting in 2017) about the characterization of Apu, the immigrant from India who owns the Kwik-E-Mart convenience store on “The Simpsons.”

In 2017, a documentary made by a young Indian-American comedian complained that this comical character was insulting to immigrants from India.

And because today's culture thrives on outrage, especially among young adults, an anti-Apu movement seemed to have gained enough strength in 2018 to lead to the reported removal of Apu from all future episodes of “The Simpsons.”

This does not appear to have ever been confirmed by anyone associated with the show or the Fox network.

But if true, the story would serve as another reminder of how free speech, expression and creativity can be curtailed, stunted and denied at the behest of a small number of self-appointed vigilantes whose use of social media as a medium for their anger makes their voices seem louder -- and by implication, more important than they really are.

The TV Blog has no doubt that some people -- Indian immigrants and perhaps even other people -- are offended by Apu. No creative person or TV show can possibly ever satisfy everyone.

But are there enough such people angry about Apu to warrant the removal of this character who is beloved by so many others? The TV Blog believes the answer is no.

Where does it all lead? “The Simpsons” is well-populated with stereotypes. Fat Tony the gangster and Luigi the Italian restaurant chef might be offensive to some Italian Americans, although no such groundswell of complaint appears to have erupted over them.

For many years, an angry leprechaun has turned up from time to time on “The Simpsons” to represent the Irish.

Sure, these are all stereotypes, all offered up comedically. In fact, their very outrageousness is part of their comedic appeal.

The appeal is similar to the way we laugh at the daring of a stand-up comedian who traffics in material that most of us would find offensive in our everyday lives, and would not dare say ourselves. But when a comedian says it, suddenly it's OK.

However, from the manner in which some people are complaining about Apu, you might think the producers and writers of “The Simpsons” were on par with the Ku Klux Klan.

Stories of similar outrage were frequent topics for the TV Blog in 2018. In a precursor to the defection of advertisers this month from “Tucker Carlson Tonight” on Fox News Channel over remarks he made in a public appearance about immigrants, some advertisers bailed last April on “The Ingraham Angle” on Fox News after she made a disparaging remark about a high school student who survived the massacre at Marjory Stoneman Douglas High School in Parkland, Florida, last February.

The year's TV Blogs included three (plus this one) on the Apu controversy. Other blogs focused on the political and cultural commentary that emanated from the mouths of various celebrities at awards shows such as last winter's Golden Globes and Oscars.

Other stories in this outrage vein included the one about Samantha Bee, and how advertisers bailed on her show last spring after she used the c-word to describe Ivanka Trump, and another story about a boycott of Netflix proposed by some vocal activists on social media last May after the streaming service announced a content-production deal with Barack and Michelle Obama.

Certainly, in a nation where freedom of speech and expression are guaranteed rights, complainers have as much right to gripe about stereotypes or ex-presidents in any way they wish.

But too often, when they apply their own right to free expression to complain about others, their aim seems to be to deny the same right to others.

There is no sign that the complainers on all sides will sudden grow thick skins in the year ahead. Look for more such cultural vigilantism in 2019.