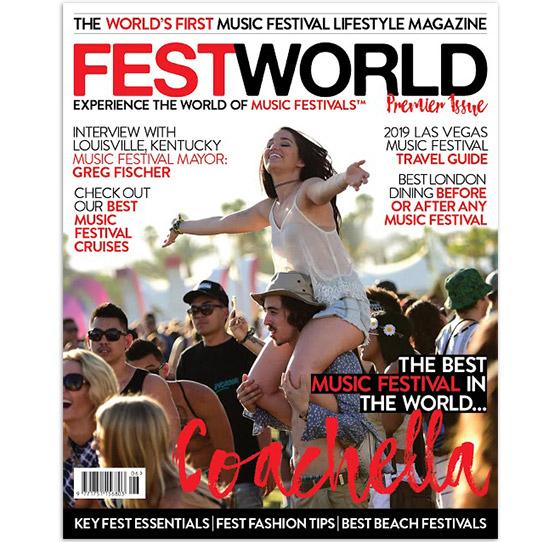 Music festivals fans just got their own print magazine.

The quarterly FestWorld debuts March 9. It doubles as a lifestyle publication for the niche, covering all aspects of the festivals: travel, fashion, art, food, reviews and gear.

While Rolling Stone, Billboard and Spin are noted for their music coverage; FestWorld's focus is live music and events.

FestWord will be sold at airports and music festivals worldwide. There is no digital version.

However, to augment its festival ethos, FestWorld’s online site lets fans book hotels, flights. They can also watch videos of past festivals.

According to Billboard online, 32 million people go to at least one music festival every year in the United States, and 14.7 of those million are millennials. There are currently more than 800 music festivals in the U.S.

FestWorld estimates 150 million people worldwide, based on the attendance of all small-to-large music festivals globally, given studies by Eventbrite and Festicket in Europe.

“A print magazine fits right into the festival ethos, which is rooted in travel, adventure, and new friendships,” stated founder Scotty Moore, who also founded FestPop, a site dedicated to music festival discovery.

Moore won't reveal his advertisers till the premiere issue, but says he's "working with the Marketing Arm, a marketing and promotion agency owned by Omnicom Group, and supporting State Farm’s “Neighborhood of Good” initiative by donating a full page ad."

Each issue has a guaranteed circulation of 350,000, and a $5.99 cover price. One-year subscriptions are $12, and $2 from every purchase goes toward helping end the opioid epidemic. Moore has joined forces with iHeart Media and WPP, both companies are committed to fighting the opioid crisis.
events, magazines, music, print
Next story loading