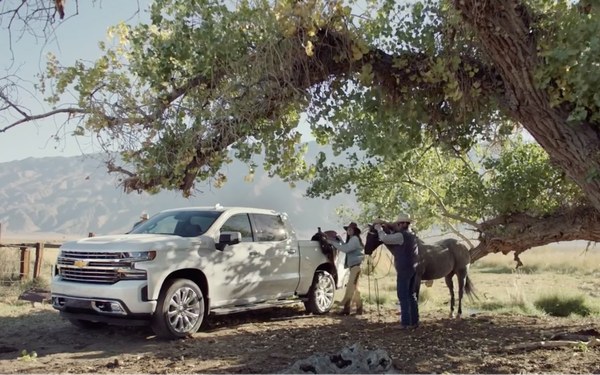 Chevrolet is launching a campaign for the all-new Silverado pickup truck with a spot on tonight’s College Football Playoff National Championship.

The campaign also includes “disruption” marketing: In a first for the automotive category, an image of the Silverado will be integrated into the traditional brown packaging on 7.1 million Amazon boxes.

The 60-second “A Little Bit Country, A Little Bit Rock ‘n Roll” from Commonwealth//McCann shows how the truck is designed and engineered for all facets of America. The ad features a variety of truck owners quoting the lyrics of Donny and Marie Osmond's signature song from the ‘70s, which Chevy’s top U.S. marketing exec calls “poetry.”

Paul Edwards, U.S. vice president of Chevrolet marketing, declined to put a dollar figure on the campaign, but said spending would be “significant.”  A press release refers to it as Chevy’s “most comprehensive integrated marketing and social campaign.”

In another first, Chevrolet leads the other General Motors divisions in using neuroscience to test the effectiveness of the spots. About 500 consumers were tested using the medical equipment that measures brain activity in response to what is being viewed.

Edwards says the findings were helpful and he could definitely see using it again.

“It was insightful because in many cases it validated what our approach already was in a very genuine way,” he says. “People can’t lie — or say what they think you want them to say — it’s the body’s response. What it measures is your willingness to approach the ad or reverse from the ad. What is its likeability? We tailored the executions based on that feedback, but we didn’t make any wholesale changes.”

The use of neuromarketing by automakers dates back at least 15 years.  Ford of Europe and the former DaimlerChrysler have used it to test marketing messages, while Hyundai has used it for feedback on car designs.

Edwards calls the spots an “evolution or a freshening” of the “Real People, Not Actors” spots and said future executions for the Silverado after the initial launch spots will include that four-year-old, ongoing creative approach.

Two additional spots will debut during the first half of the year. “Official Truck of Real People” shows how it’s a pickup truck for every use, from work to play. “Tailgates” shows the truck’s rear being used over the decades, highlighting the industry-first, segment-exclusive power up/down tailgate.

In another automotive first, Chevy will sponsor the 9 p.m. ET version of the video game "HQ Trivia" on Jan. 8, giving players the chance to win a Silverado.

Custom integrations featuring the truck will air tonight on NBC's “Manifest” and ABC's “Jimmy Kimmel Live!” As part of the launch week, the Chevy Silverado will have a placement on the Amazon, Bleacher Report, USA Today, CNN and YouTube homepages.

Chevrolet partnered with the American Cancer Society to reward a family with the experience of “camping” in the Daytona International Speedway infield — sleeping in specially outfitted Silverado truck beds.

Also, for the first time ever, the Daytona 500 will be paced by a pickup truck. Dale Earnhardt Jr. will lead the crowd to the green flag in an all-new Silverado.

Additional integrations with Pandora radio, Turner Networks and NBC's “This Is Us” will roll out over the coming months.