'Lohan's Beach Club' Not A Very Nice Place To Visit 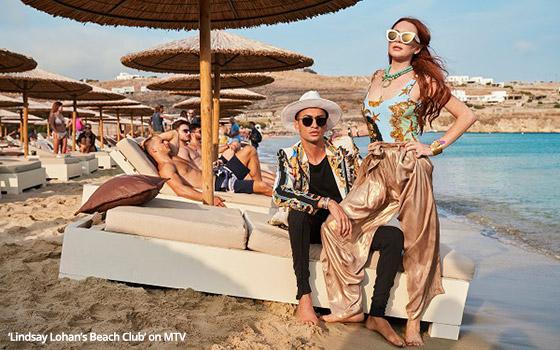 So much is wrong with this new MTV reality series that it is difficult to know where to begin.

Perhaps we can start with this: When the manager of this beach club/hotel-resort on the Greek Island of Mykonos baldly encourages his “brand ambassadors” -- basically a group of servers, hosts and hostesses -- to flirt or even have sex with so-called “VIP” clients as part of their efforts to sell them expensive vodka or day-long cabana rentals, this manager comes across like a straight-up pimp.

And unfortunately, that positions his business partner, Lindsay Lohan, as much the same thing.

The show is called “Lindsay Lohan's Beach Club,” which is apparently a real place located on the Aegean Greek island of Mykonos.

Lohan, 32, supposedly owns the place -- officially named “Lohan Beach House Mykonos” -- and manages it with a man named Panos Spentzos. In the MTV show, he claims to have worked with Lohan in a nightclub she owns in Athens.

To be fair, Lohan is not seen in the show encouraging staff members to provide sexual favors -- or come close to it -- as part of their alcohol sales efforts. On the show, this is the sole province of this Panos character, who brags about being heartless.

Who knows? In real life, he may or may not be a jerk, but he plays one on TV.

So Greece is where the former child-and-teen star of “Freaky Friday” and “Mean Girls” has gone to seek her fortune in recent years.

More power to her, even though some might argue that a career involving the sale of wines and spirits to party-hearty Athenians and tourists in an Athens nightclub and a beachside bar in the Greek Isles might not be the healthiest of choices for a person like Lohan who has struggled with alcohol and substance addiction issues.

No mention of this is made in the premiere episode of "Lindsay Lohan's Beach Club." But at the same time, Lindsay is not seen swigging from any bottles either.

The same cannot be said of this reality show's cast of young idiots, who drink and party on Lindsay's dime like they expect the world to end tomorrow.

Basically, the show's premise is this: A group of American young people have all been flown to Mykonos to apply and try out for prospective employment at this Lohan beach place.

They are vying to become brand ambassadors whose comportment and professionalism is supposed to define and enhance the Lindsay Lohan brand.

Unfortunately for Lohan, they don't seem to give a rat's patoot about her or her brand. Instead, they quickly make themselves busy guzzling vodka, swimming semi-nude, battling each other like middle-schoolers and/or bragging about their looks and sexual prowess.

In fact, how these people look is apparently the first and possibly the only requirement for employment at this beach house, according to Panos, who does not seem to realize that no one judges anyone based on their looks anymore.

These applicants have supposedly also been chosen based on their resumes, on which their careers in the industry you might identify as “nightlife hospitality” are delineated.

In this show, all of them place an emphasis on the experience they each say they have had in associating with and hosting celebrities in big city nightclubs. However, none of these celebrities are ever named.

Since no celebrities are seen at Lindsay's Beach Club other than La Linz herself and a Greek model no one outside of Mykonos has ever heard of, one wonders why experience around celebrities would have any value here.

Believe it or not, the most likable character on this show is Lindsay, who comes across like a Ph.D. candidate compared to these people she might hire.

Here, she is packaged as demure, serious and businesslike -- all of which would be a lot easier to accept if she had not said yes to putting her 32-year-old self on display on MTV, the network of “Teen Moms” and “Jersey Shore.”

The TV Blog believes Lindsay Lohan is too smart for this kind of reality TV show. By now, at her age, she should be on CNBC, or maybe guesting on “Shark Tank.”