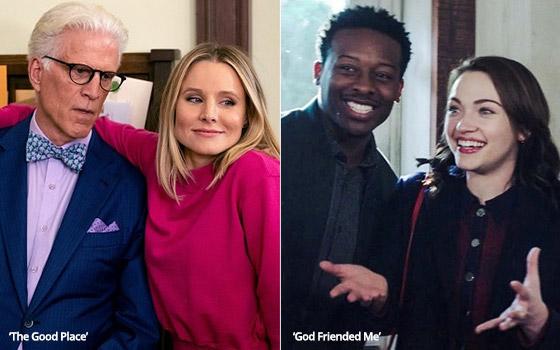 The subject of God presents a challenge to TV networks -- and yet, every couple of seasons, some network or another tries again to tackle this topic.

At present, two shows on network TV dabble in the topic -- the NBC comedy “The Good Place” and the CBS drama “God Friended Me.”

In “God Friended Me,” a New York podcaster and his pals have heartwarming adventures each Sunday night on CBS under the seeming supervision and guidance of a godlike force whose means for contacting these mere mortals is via social media.

In this manner, social media meets religion -- and in the process, a potentially new definition of the almighty is created in the context of our modern world. But more on that later.

Now in its third season, “The Good Place” concerns itself with heaven (the good place in the title), and the admittance process supervised on the show by Ted Danson. This show, which also stars Kristen Bell, is seen Thursday nights on NBC.

Speaking of eternity, that’s what it felt like to watch this week’s episode of “The Good Place” in advance earlier this week, despite its merciful commercial-free length of 21 minutes (approximately).

The show was all sarcasm and snark -- the kind of repartee that if you encountered it in a social gathering here in the real world, it would send you rushing for the nearest exit.

Perhaps one has to already have been a fan or regular viewer of this show to understand this episode, but for everyone else, the show is impenetrable.

Maybe some of this show’s previous episodes had something to say about heaven or God or spirituality.

But if this week’s episode is any indication, “The Good Place” does not intend to be anything other than a vapid waste of a viewer’s time.

On the other hand, “God Friended Me” seems to aspire to at least try to fulfill the goal implied in its title -- to figure out where God fits in our modern world.

Since the show’s premiere last fall, its main character, Miles Finer (Micheal Brandon Hall), has been on a mission to find out who keeps sending him messages on social media while claiming to be God.

As the second half of the show’s first season got underway this past Sunday, the search seemed to be zeroing in on a reclusive and mysterious tech genius, rather than steering Miles and his friends toward a realization that this mysterious social media stranger is not some mortal man, but the Almighty Himself.

However, even if this show does someday unmask this being as just some powerful man and not God, this show is not avoiding the subject of God.

In each episode, these social-media messages, although cryptic, nevertheless guide Miles on various missions of discovery on behalf of total strangers he encounters in ways that seem coincidental but can also be explained as God-given.

The good works he then performs for these strangers are decidedly Internet-based, which can lead a viewer to conclude that for the makers of this show, God might in fact be Google, or more generally, an unseen power behind the global computer networks that now govern (and watch) our every activity.

Successes in the realm of God-based drama are far and few between in prime time. For every “Touched By an Angel” -- which was a hit for CBS from 1994 to 2003 -- there are plenty of other attempts that never had a prayer such as last season’s angel entry “Kevin (Probably) Saves the World” starring Jason Ritter on ABC.

Will TV continue on its God quest in seasons to come? Heaven knows.