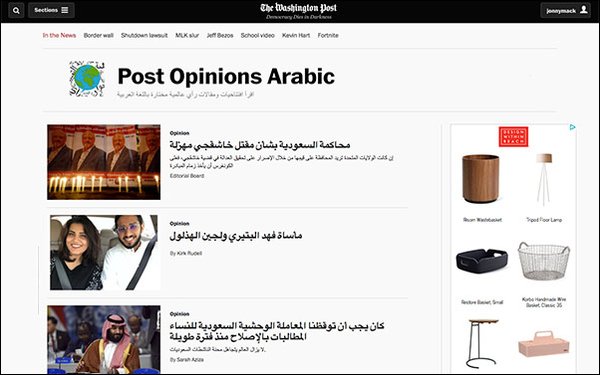 The page will house translations of Global Opinion columns, editorials and op-eds relevant to The Washington Post’s Arabic-speaking audience. It will feature commentary from writers around the world, including those based in the Mideast and North Africa.

The Global Opinions section works with professional translators who are native speakers from the region, according to Eli Lopez, senior editor of the section.

“The mission of the Global Opinions section has always been to give readers around the world a platform where they can find a variety of perspectives on the most pressing issues affecting their region,” stated Fred Hiatt, editorial page editor at The Post. “This page will make it easier for more readers to access free and independent commentary about the cultural and political topics that most impact them.”

“The importance of this has become more evident since the murder of our own colleague, Jamal Khashoggi, who saw very clearly the need for a forum such as this," Hiatt added.

WaPo had already published columns by the slain journalist in Arabic, as well as other translated Arabic pieces for over a year in the Global Opinions section.

The importance of this effort became even clearer after Khashoggi's death, Lopez noted.

Also beginning today, The Washington Post will run ads in print and across digital platforms, marking 100 days since Khashoggi was killed in the Consulate of Saudi Arabia in Istanbul.

Over the past year, WaPo’s Opinions section has experimented with translating op-eds in other languages, including Spanish, Turkish and Farsi.