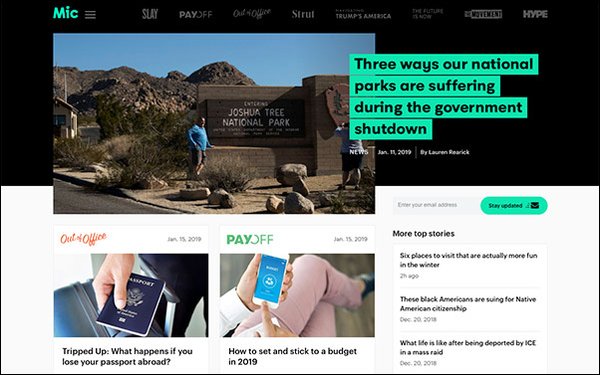 Over the past week, Mic, which sold to Bustle Digital Group for $5 million last year, has published new content.

The new content follows a mass layoff at the company in late November, prior to its sale to Bustle Digital Group, that saw the majority of its 100-person staff axed. Cofounders Chris Altchek and cofounder Jake Horowitz remain at the new operation.

Last September, Mic was reportedly in negotiations to sell the company to an unnamed buyer, following financial hardships stemming from the cancellation of its Facebook video series. The series was estimated to bring in $5 million over 12 months.

In addition to money lost through the cancellation, the publication lost out on other sources of revenue, including potential sales and new rounds of funding, which were anticipated to follow the show’s renewal.

Once valued at hundreds of millions of dollars after rounds of fund raising, the outlet was rumored to fetch $10 million in a sale, but ultimately brought in half that.

A representative of Mic’s union told The Wrap: “The NewsGuild of New York and the hard-working editorial staff of Mic are monitoring the actions of Bustle management closely, holding them privately and publicly accountable for their actions.

"We have demanded that [Bryan] Goldberg adhere to journalistic ethics and exhibit professional integrity in protecting the contributions and the materials created by our members. We have yet to receive a response.”
online publishing, web sites
Next story loading