'Mic' Lays Off Most Staffers, In Talks To Sell To Bustle Digital Group 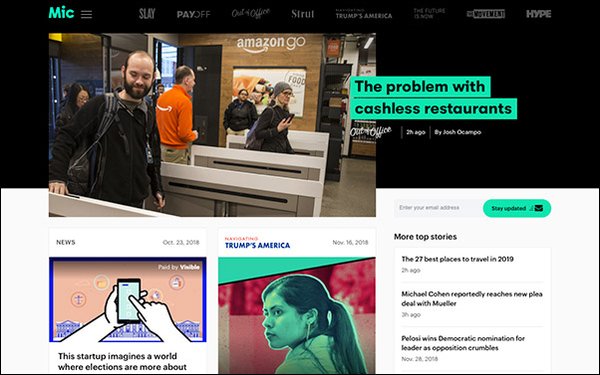 After reports yesterday that Mic was in talks with Bustle Digital Group to sell at least part of its assets with possible layoffs looming, the company laid off the majority of its 100-person staff this morning, according to Recode.

The entirety of the company’s editorial and branded content teams were let go in the shake-up.

In an email to staff, she stated: “Our business models are unsettled, and the macro forces at play are all going through their own states of unrest. If anyone tells you they have it figured out, a special plan to save us all, or that it’s all due to a singular fault, know that is categorically false. Like the truth, it is indeed complicated.”

Recode reports that Mic CEO Chris Altchek and cofounder Jake Horowitz will remain with the company, following its pending acquisition.

Mic reported in September that it was in talks to sell the company to an unnamed buyer. Following the cancellation of its Facebook video series "Mic Dispatch," which was set to bring in $5 million dollars over 12 months, Mic ramped up sale negotiations with Bustle.

According to Recode, other sources of revenue, including potential sales and new rounds of funding, evaporated with the cancellation of the Facebook deal. Mic, along with a slew of other digital media companies, relied heavily on the traffic and revenue it garnered from Facebook.

The Information reports that Mic will likely sell for less than $10 million, a scenario similar to Mashable’s acquisition late last year, when it was purchased for $50 million after being valued at $250 million. In 2017, Mic was reported to be worth hundreds of millions of dollars after various fund-raising rounds.

Founded in 2011, Mic has seen decline in other areas, too, including traffic, which fell from 18 million unique viewers in October 2015 to 5.5 in October of this year, per comScore.

Should the deal with Bustle Digital Group succeed, Mic would be added to a growing list of media companies acquired over the past year.

Earlier this year, Bustle Digital Group’s founder Bryan Goldberg acquired Gawker, which he plans to relaunch as a digital entity in 2019, in addition to Flavorpill Media Inc., which it plans to leverage to build its events group, The Zoe Report and Elite Daily.