PBS Historian Ensures That It Is Always Sunny In Great Britain 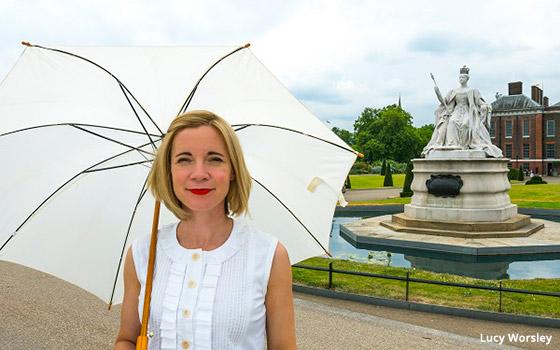 Sometimes it just feels great to observe someone in the prime of his or her career.

Such seems to be the case with Lucy Worsley, a British historian and TV presenter who is turning up lately with greater frequency on PBS.

That's her in the photo above hosting a documentary that aired recently about the wedding of Queen Victoria and Prince Albert in 1840.

Despite Great Britain's rainy reputation, Worsley, 45, is the sunniest personality to come out of English television in memory.

As a historian, she seems to specialize in old English houses, including manors and palaces, and the lifestyles of those who lived in them, from what they wore to what they ate.

Some might complain that PBS relies much too heavily on content imported from Great Britain. And while that may be true, the public broadcaster can be excused for airing all of these documentaries hosted and explained by Worsley.

She possesses an infectious enthusiasm for the periods of history she covers. On PBS, she has been seen in “Victoria & Albert: The Wedding,” “Secrets of the Six Wives” (about the wives of Henry VIII), “Tales from the Royal Bedchamber,” PBS's coverage of last spring's royal wedding of Prince Harry and Meghan Markle and others.

In her shows, Worsley takes viewers inside historic residences and behind the scenes at England's many museums.

Her conversations with historians and curators in the museums’ storage facilities where royal garments and accessories hundreds of years old are loving and carefully stored are the best parts of her shows.

These scenes take advantage of one of TV's fundamental strengths -- the medium’s ability to take us places we cannot go ourselves.

From live sports and news to documentaries that originate from across the globe, TV's ability to take you there is its greatest asset, and the Worsley documentaries are great examples of this.

While it is no “Downton Abbey” (and no show probably ever will be), “Victoria” seems to have caught on. Pairing episodes of the series with the Worsley shows that shed light on the mores and manners of the Victorians makes perfect sense.

In her shows, Worsley participates by donning the outfits and costumes of the eras she covers. She seems to have fun with it, and so do we.